December 2019 was a very busy month for island marathoner Ian ‘Lion’ Gordon, after participating in four consecutive marathons in Belize and Mexico. According to the island runner, this is a record for an athlete around his age (42), as he continues to pursue his dream to someday represent Belize at the Olympics. As the New Year begins, Gordon is once again preparing to compete in the international arena at a competition in Veracruz, Mexico on January 19, 2020. He is appealing to the community for any possible assistance to finance his participation in this upcoming marathon. 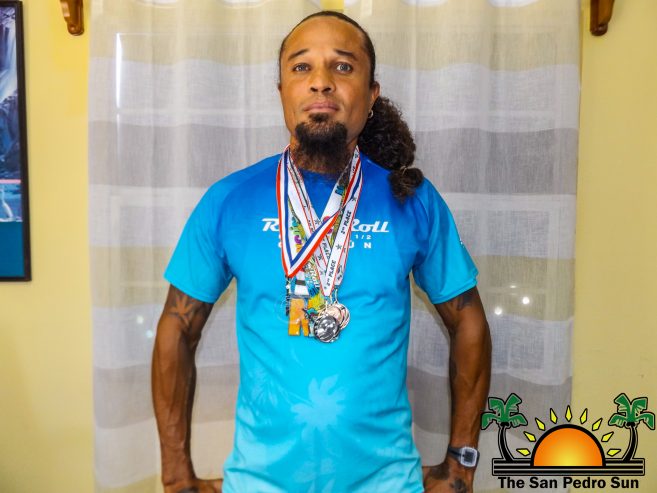 Gordon shared with The San Pedro Sun that during the first week of December 2019 he mastered a 13.1 mile marathon in the city of Cancun, Mexico. When he returned to Belize, he competed back to back for three consecutive weeks. He came in second in a 26.2-mile marathon held on the Hummingbird Highway. Gordon also participated in a track and field competition at the Marion Jones Sporting Complex excelling in the 800 meter and 2,000 meter sprint.
Gordon has been competing in marathons for the past three years, and he hope to motivate younger athletes to do sports and stay healthy. He wants to show the youth that if he can do these type of competitions at his age, anyone can excel in this type of sport. To carry on a healthy sporting routine, he recommends discipline, lots of rest, balance diet and a strong vision in sports. The island runner added that as he hopes to someday represent Belize in the major leagues (Olympics), he will start competing on half marathons only (13 miles) beginning 2020. Gordon believes that this new technique will make him a much better marathon runner as he has always competes in full marathons (26 miles).
As he prepares to compete in Veracruz, Mexico this month, Gordon hopes to get the support from his island community and promises to do his best to bring home another medal/trophy and represent Belize well. He plans traveling on January 14, 2020. Anyone interested in assisting him can call him at phone number 628-6696 or 665-4372. He can also be reached via Facebook under Ian Gordon.