For the second time in a row and the second season of the National Amateur Women League (NAWL), the San Pedro Pirates Female Team is heading to the tournament’s semi-finals after tying 1-1 with Sagitun Girlz over the weekend. The match occurred on Saturday, June 18th, at the Michael Ashcroft Stadium in Independence Village, in the southern Stann Creek District.

The game kicked off at 3PM, and ten minutes into the first half, Sagitun’s Sabrina Eiley opened the score. The island girls were at a 1-0 disadvantage for most of the first part of the game, but at minute 40, San Pedro’s Iamara Baptist found the back of the net with a powerful shot that Sagitun’s goalkeeper was unable to stop. At the end of the first 45 minutes, the score was 1-1. 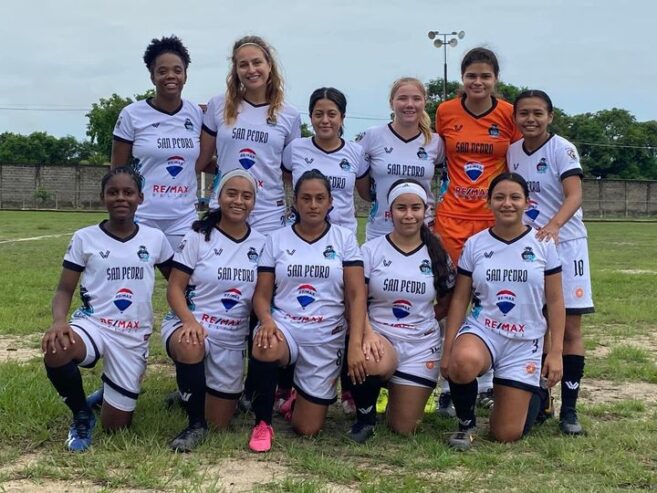 The second half of the match did not see any other goals, although both teams made close attempts to widen the score gap. The island girls played their hearts out on the pitch, but Sagitun’s barrier proved hard to break. Likewise, San Pedro Pirates did not make it easy for their opponent to score, and the match ended 1-1.

With this draw, San Pedro Pirates and Sagitun Girlz are tie in points, both with 11. The other teams leading in the standing are Rumberas with 12 points and Jewel Fury with a total of 17.

On Saturday, June 25th, San Pedro Pirates will be hosting NAWL’s leading team, Jewel Fury, for the semi-finals starting at 4PM at the Ambergris Stadium. This is a crucial game for the island team, and a win is imperative to continue in the championship journey.