Mexican travel journalist, content creator, and YouTuber Mariel Galan visited Belize to document her experience in the Jewel and promote it to millions of travelers in her country and other parts of the world. Her travel content (videos) can be seen on her YouTube channel dubbed ‘Mariel de Viaje.’ She has gained more than 49 million views for her travel vlogging in destinations around Mexico and other parts of the world.

During her four-day visit to Belize, Mariel de Viaje was accompanied by Belize Tourism Board (BTB) representative Mike Hernandez, who ensured she experienced some of the country’s best attractions. The BTB has been hosting Mexican influencers to promote the Belizean tourism product in Mexico, a nation north of Belize with a population of over 128 million.

Mariel’s visit to Belize started on Monday, August 8th, in Hopkins Village in the southern Stann Creek District. This coastal Garifuna community is trendy among visitors because of its rich cultural aspect. In an exclusive interview with The Sun, Mariel said she was amazed by Hopkins and the cultural experience. She even had the opportunity to learn how to make the popular and delicious Garifuna dish, Hudut. “The main reason I would return to Hopkins is to have another Hudut soup,” said Mariel. “Hudut is so good; it’s a delicacy; the fish and coconut broth flavors are very delicious.” She learned to cook this traditional food and also had the opportunity to practice some drumming. Mariel also visited the Belizean rainforest and enjoyed hiking and the Tiger Fern waterfall, not far from Hopkins.

Hop on to La Isla Bonita
The Mexican influencer, recognized as one of Mexico’s top video content creators, spent her last days in Belize visiting La Isla Bonita of San Pedro, Ambergris Caye. There she had the adventurous opportunity to swim with nurse sharks and explore the second longest barrier reef in the world. She described her visit to the Hol Chan Marine Reserve and swimming with the sharks as unique and very special after experiencing so much diverse marine life in their natural habitat. The adventurer travel vlogger also took a tour via airplane to the world-famous Great Blue Hole. 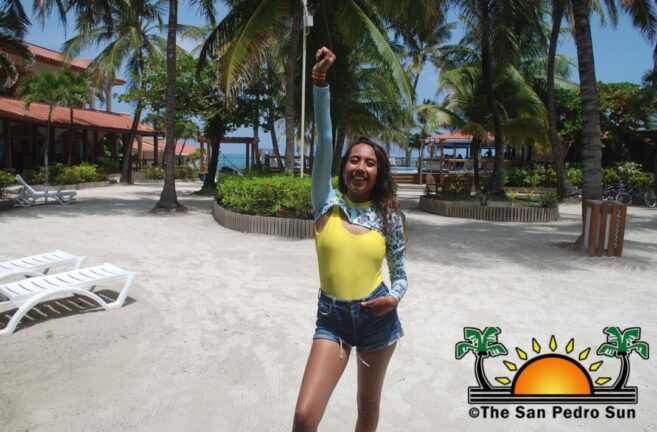 Mariel invites everyone to visit Belize
Following her experience in Belize, Mariel recommends the Jewel to all her followers, particularly those in Mexico. Regarding Ambergris Caye, Mariel stated that many travelers, especially Mexicans, may not know how accessible this island is. Although there are no frequent flights between Mexico and Belize, Mexicans can easily access Ambergris Caye via the bordering city of Chetumal via water taxi. Mariel says she will promote the country’s places of interest with her Mexican audience, emphasizing that a visit to Belize is unique. “The experiences you can have here in Belize are unmatched. The Great Blue Hole, the barrier reef, La Isla Bonita, the marine and land national parks, the culture, the gastronomy, and the Belizean people are so welcoming,” she said. Mariel believes travelers need to pay more attention to places like Belize because it is worthy.
Mariel de Viaje invites everyone to subscribe to her social media platforms and look for upcoming videos about the visit to Belize.
Her YouTube channel with over half-a-million followers is www.youtube.com/c/MarieldeViaje. She can also be found on Facebook at https://www.facebook.com/MarieldeViaje, and on TikTok and Instagram as @marieldeviaje.

Belize Tourism Board boasts hike in Tourism Arrival in early 2013