On Thursday, December 15th, a section of northern Ambergris Caye experienced a power outage after a motorist crashed his vehicle into a light post. According to reports, two children were in the vehicle at the time of the accident, but only one of them received minor injuries to the face, while the driver was observed bleeding from the side of his face. After both the children and the driver were treated, he was detained by police, fined, and released. 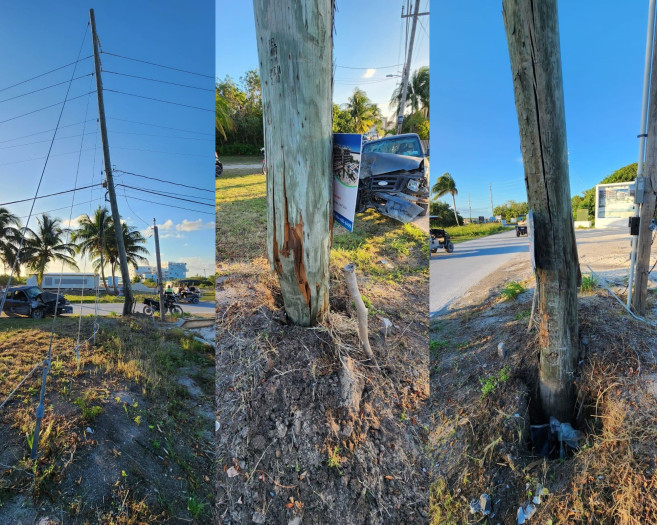 There are no official reports that the unidentified driver was driving under the influence. However, Police confirmed he pled guilty to an undisclosed offence, was fined and was later released. Police added that the driver had been disqualified from driving. No further details were provided about his process at the police station.
According to unofficial reports of the accident, the driver was heading north of San Pedro Town with two children he had picked up from school. At some point, he was allegedly distracted and ran into the light post at a high speed. Following the incident, Belize Electricity Limited notified residents living in portions of North San Pedro from Boca Del Rio Bridge to Perla Del Caribe beach resort, including San Mateo subdivision, Playa Blanca, and Tranquillity Bay Resort that they would without power until at least 6PM as they worked to replace the damaged pole.
Motorists are advised to drive cautiously, especially if they are travelling with children. Most of the roads on Ambergris Caye are narrow and when driving in large vehicles drivers should watch their speed and surroundings. The public is reminded that driving under the influence is a felony, thus the local authorities (police and transport department) ask for everyone’s cooperation, particularly during this holiday season to be extra careful on the road. Remember, someone is waiting for you at home.