« Older: Government of Belize Supports Agreement Between BSCFA and ASR/BSI
Newer: » Over 300,000 Overnight Visitors for 2014


Over 1,516 cane farmers attended a special general meeting held on Sunday, January 4th at the Escuela Secundaria Technica Mexico campus located in San Roman Village, Corozal, where they rejected all agreements proposed by the Belize Sugar Industry/ American Sugar Refinery (BSI/ASR). Even though the 2015 sugar cane season should be well on its way, cane farmers refused to back down on their demands for better compensation for their product. As such, the crop season will not commence until an agreement between the two parties is signed. The cane farmers stated that they will continue negotiating with BSI/ARI and hope to get a better deal.
Not only was BSI/ASR’s proposal rejected but BSCFA also concurred to join the mandamus action spearheaded by Lucio Teck and Audrey Matura- Shepherd to force Sugar Industry Control Board (SICB) to open the crop season without a signed agreement between BSCFA and BSI/ASR. “The mandamus we will not withdraw, unless the SICB does what the law mandates it to do and fix it and put it in the Gazette.

Then there’ll be no need for mandamus. Basically what I explained to them and what I’ve been saying all along in different interviews, is that there is a provision in the law where the SICB-as an autonomous body that can sue and be sued in its own name- has to set a date. It is not optional; it has to set a date and the law also says the manufacturer has to accept deliveries. So I am telling them while there are these legal options, they also have to be prepared to deal with the fact that some people will not want to obey it and that there are mechanisms in law how to get people to enforce an order. And that the truth is that in light of everything that is going on, the best thing to do is to resolve the problem peacefully and to let them know that there are provisions of law that they can rely on,” said Matura- Shepherd.
But the legal process can be long, and cane farmers are already at a loss as product is spoiling. “As from the beginning, we did the estimation, and we need about 208 days to mill all that estimated product. Up to now, we have lost let’s say 30 days. In fact before the start of December, we already knew that there was product we would not be able to harvest, and now with this delay, there is much more of the crop that we will not be able to harvest this year,” said Ezequiel Cansino, the Chairman of the Committee of Management BSCFA. But decisions have been taken and BSCFA Branch Director Aflredo Ortega has indicated that a letter will be sent immediately to SICB asking them to open the crop season or to face legal action. “We will be holding hands with Matura- Shepherd so that she can go around with us explaining to farmers the legal terms and what the implications are of the mandamus. If BSI/ASR and SICB are serious about opening the crop season, I don’t think we have to wait on anything for the court. I think that we can sit down and put together a date to start the crop. Then we can continue negotiations without jeopardizing the product,” said Ortega. 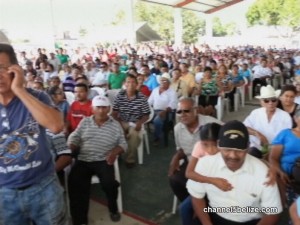 Prime Minster Honorable Dean Barrow is not happy with the outcome of the meeting, and has expressed disappointment of the rash decisions made by the cane farmers. “I am not sure where we go from here. Government will have to try and reach out to both sides and see if there is a basis for going forward. What I know is absolutely not on is this foolishness which was given additional currency by way of, as I understand it, a resolution passed yesterday, this notion that government can somehow oblige BSI/ASR to accept cane in the absence of an agreement. That’s not on. It’s not on, from the point of view of government’s assessment of the issue and I don’t think it’s on in terms of any kind of court order. Everybody knows you can’t predict what courts will do, but my best sense is that courts don’t act in vain. Courts don’t have armies, courts don’t have police forces and no court will make an order that is unenforceable for all sorts of practical reasons. So, that’s off the table in my view and therefore we have to try to re-institute dialogue, which of course is going to be far easier said than done. What worries me, as I said, is trying to bring both sides back to the table because it is going to be extremely difficult. BSI/ASR clearly will be reluctant because it means starting negotiations all over again. I noticed yesterday the farmers never even passed a resolution saying, ‘well we want to deliver based on last year’s agreement’ of an interim agreement. They seem to be saying we reject any agreement in the current form. They seem to be suggesting we go back to square one. That’s going to be a very tall order, but I am worried about some rumblings I hear of these people talking about going it on their own, about hiving off from the BSCFA and doing their own thing,” said Barrow.
For now the sugar cane season will remain closed until either an agreement between BSI/ASI is signed or the mandamus in passed.