The San Pedro chapter of the Belize Tourism Industry Association (BTIA) held their annual general meeting on Wednesday, November 29th at Fido’s Courtyard. The meeting was attended by several members of the local chapter, along with its board members headed by San Pedro BTIA Chairwoman Tamara Sniffin, as well as BTIA Executive Director, John Burgos, other representatives from the BTIA and special invited guests Valentino Shal and retired Police Superintendent Rudolph Orio. The meeting touched a wide range of topics, from sustainable tourism to marketing, membership and tourism security. At the end of the gathering, elections were held and a new board was installed. 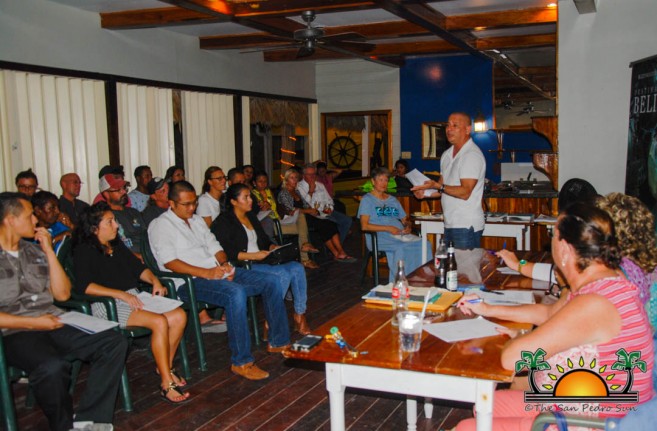 Chairwoman Tamara Sniffin initiated the meeting shortly after 6:30PM, welcoming everyone and weighing on the progress the chapter has experienced throughout the year. Sniffin stated that the journey has not been easy, but progress is on the right track and they look forward to a busier and more productive 2018.
Burgos then addressed the gathering, reminding those present that the BTIA is an active advocate of sustainable tourism. He also took the opportunity to inform everyone that the organization’s new website will be offering new features, including the ability for members to upload videos of their establishments. 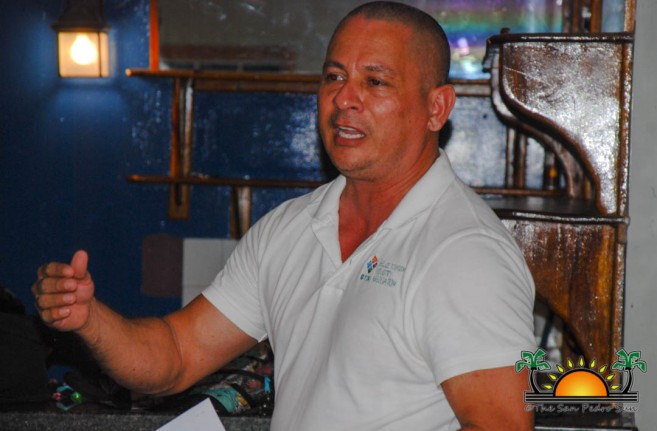 The Executive Director then focused on what is in store for 2018. “For next year, one of the projects in which we will be focusing is training,” Burgos said. “This is in compliance with the minimum requirements for hotel and tourism accommodations, which everyone will need to meet by the end of 2018. There will be training for first aid and fire operations, and we are happy to say that BTIA has secured funding to subsidize these training and offer them at a minimal fee to our members.” Non-members will pay a different price. Hospitality, maintenance, housekeeping, online marketing, and even social media marketing training will also be offered. 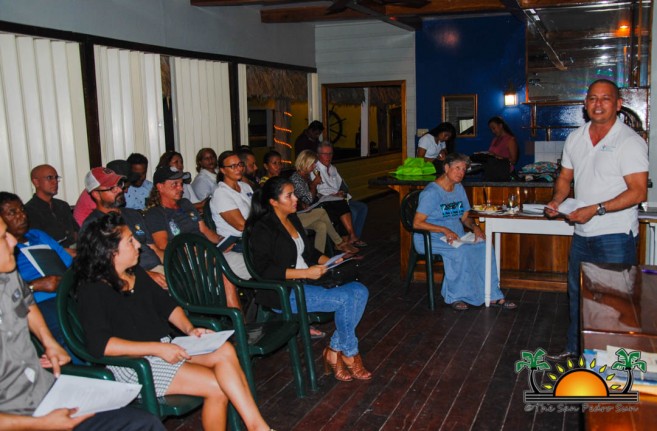 Burgos shared the possibility for their members to connect with Central American agencies through organizations linked to SICA. “They have funds available to market and promote Central America as one destination,” said Burgos. “Since 2016, they have been asking all the Central American countries and us at the BTIA to create multi-destination packages, which is a combination of two countries. For example, a package can combine Belize and Honduras.” According to him, these packages will then be promoted in Europe and South America. “All you need to do is provide the BTIA with your packages and we will submit them to these agencies,” said Burgos. While there is no deadline for package submission, he recommended that the sooner they are submitted, the more exposure the product will have in Europe and South America. 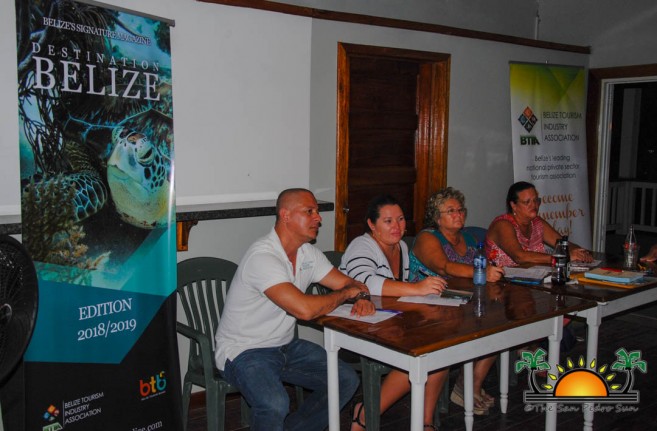 The issue of garbage was also discussed at the meeting, and Burgos congratulated Sniffin and the San Pedro chapter for their efforts to try keeping La Isla Bonita clean. He briefly referred to a campaign that will involve students from the San Pedro Junior College working on a project to get rid of the large disposed items such as appliances on the island. Burgos also spoke about their advocacy to get the Government to enforce the necessary laws to protect some of the species that contribute greatly to the tourism industry. “These include sharks and other types of fishes. We have been in contact with persons that work in such areas and have data and facts about these species. With this information we can begin to advocate to the Government so they can take the initiative to enforce their fishing policies and laws,” said Burgos. “But again, we need to increase our membership. Remember, the larger we are, the louder our voice will be to achieve the changes we would like to see.” 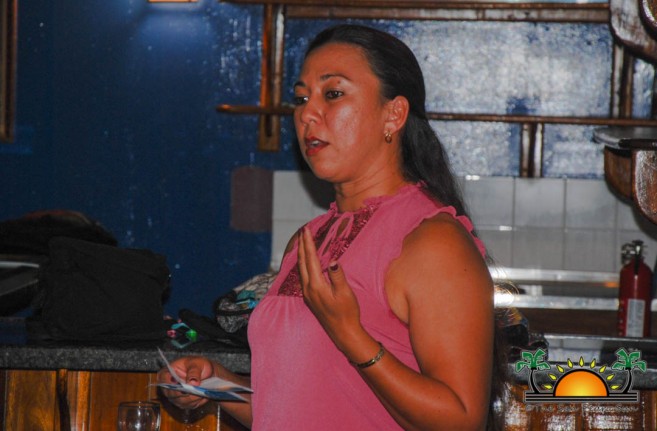 Immediately after Burgos’ presentation, BTIA’s Project Manager, Gale Ozaeta took to the floor and spoke about the organization’s signature magazine ‘Destination Belize.’ Ozaeta explained how the magazine is distributed through the Belize Tourism Board, the Diplomatic Corp in Belize and through BTIA members as well. “The magazine provides lots of information to the potential visitor to Belize with amazing images and well-rounded articles,” said Ozaeta. “For our 2018/2019 edition, we will be enhancing its website and its online platform to get better exposure. We are working with a team of professionals, which guarantees an outstanding product from which your businesses will greatly benefit.” Ozaeta indicated that contrary to previous years, BTIA will now fully manage the publication, which will allow them to offer better deals in advertising and further benefits for its members. 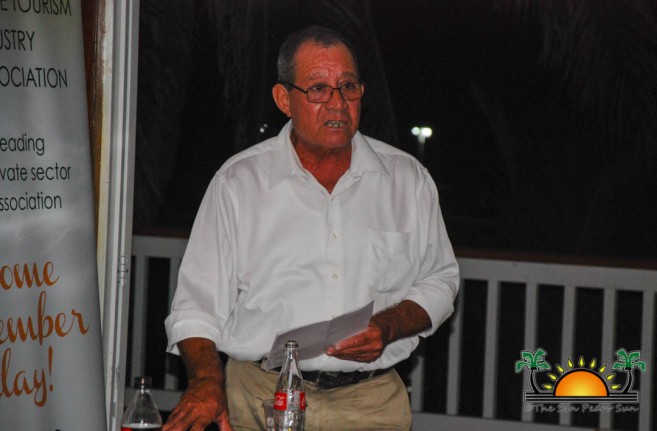 Next to speak was Retired Superintendent Rudolph Orio, who is also a member of the National Coordinator Police Auxiliary Unit. Orio spoke about the importance of tourism security and safety. “The Belize Police Department shares the same tourism concerns as the tourism industry,” said Orio. “These include crime, fear of crime and the public perception of escalating crime,” Orio called on everyone to work together and be resilient. “Notwithstanding the critical challenges and turbulent times facing Belize, the tourism industry continues to remain resilient as it remains robust in Belize’s economy,” said Orio.
The retired police officer encouraged the community to commit and make the destination safer. “We will always have crime,” he said. “What we need to do is to reduce whatever brings and drives people to commit crimes. The tourism industry needs to work with community leaders to reduce crime.” Orio encouraged tourism stakeholders, businesses, faith groups, neighborhood watches and the police auxiliary groups to join hands and cooperate with each other. “We need to focus our attention beyond the present and towards tomorrow, ultimately protecting the ‘goose that lays the golden egg,” Orio concluded. He strongly recommended having a more active citizen patrol program, where certified community members could volunteer a few hours weekly and patrol throughout the community to observe and report any criminal behavior. 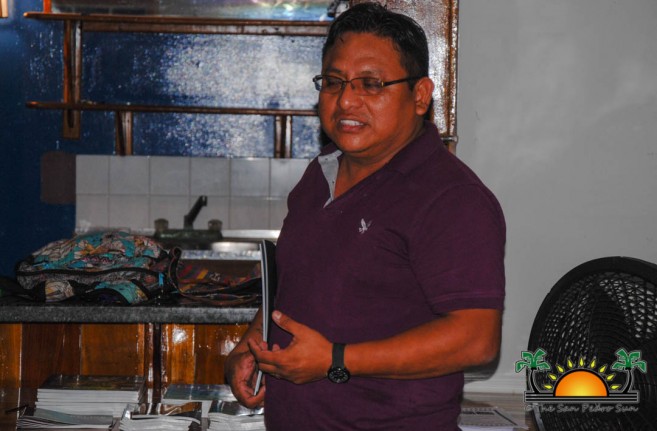 The last guest speaker for the evening was Valentino Shal, on behalf of the Belize Coalition to Save Our Natural Heritage Wildlife. He emphasized the importance of protecting the environment and thanked the people of Ambergris Caye and Caye Caulker for standing up against offshore oil exploration. “Because of that willingness to continue pressuring the Government, we have been able to convince Prime Minister Dean Barrow that the best thing to do, is to pass a moratorium to ban offshore drilling for good,” said Shal. The Belize Barrier Reef is one of the main foundations of the Belize tourism industry. “Our reef system has been on the endangered list since 2009 and that is not good,” Shal said. “This is a precious natural asset that we have, and that is another concern that we all need to work together and demand the Government to take the steps it needs to so it can remove from that blacklist,” he ended. 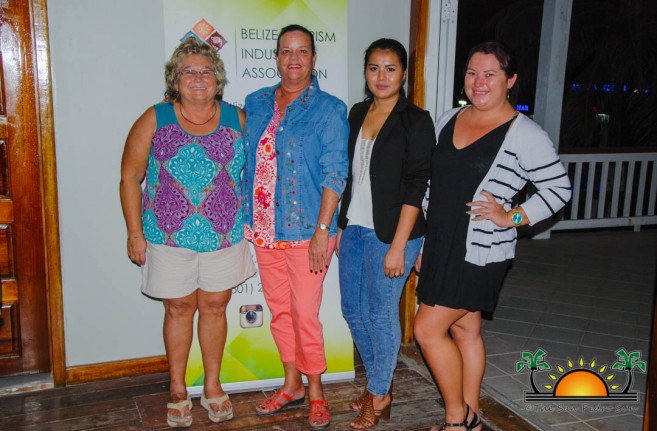 Before the meeting wrapped up, the election of the new board members for the San Pedro chapter took place. Tamara Sniffin remains as the Chairwoman, Elida Rivera as Vice-Chair, Delsie Graniel as Secretary and Melanie Paz as Treasurer. Sniffin thanked everyone for their support and she looks forward to working closely with the local chapter members and the entire tourism industry on the island. 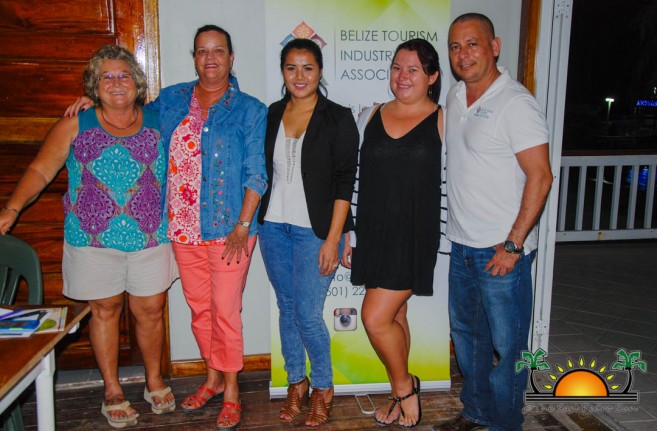 The BTIA takes this opportunity to invite all its members and potential members to the Annual General Meeting to be held on Thursday, December 7th at the Radisson Fort George Hotel and Marina in Belize City. For more information on how to become a member of the San Pedro branch contact Tamara Sniffin at [email protected] or call her at 226-2070.