Home » Community and Society » Where does Manuel Heredia stand on offshore Oil drilling?

Where does Manuel Heredia stand on offshore Oil drilling? 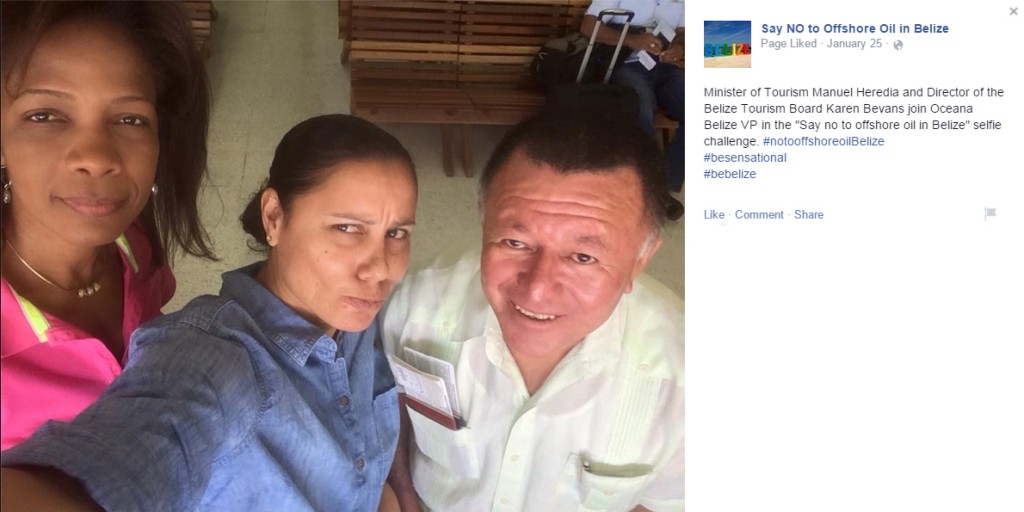 Minister Heredia indicated that when taking the photographe, he was unaward it was with regards to the “No to Offshore Oil Drilling” selfie campaign.

While the campaign has garnered major public support, especially in the coastal communities, the Government of Belize has been very careful in their position and views towards offshore oil drilling. In an interview with The San Pedro Sun, Minister Heredia who is a senior Cabinet Minister stated he has taken no position. He said that while Oceana in Belize posted the selfie picture, he had no conversation on offshore oil drilling as part of the Ocean campaign. “My Director and I were asked by Janelle to pose for a picture, but there was never the slightest conversation about anything having to do with offshore oil drilling… to say that I said ‘no to offshore oil drilling,’ is not so.”
Chanona said that when she asked the Minister and his Director to pose for the selfie, she was clear about the use of it to reiterate the call for “no to offshore oil drilling.” While Chanona said she will not go into a back and forth about the picture, she did say that it should be natural for the Minister of Tourism to ensure that oil never harms Belize’s number one industry – tourism. “I can only hope that others may join Oceana in making sure that we know where everybody stands on this issue. This is not only because Oceana is asking but all Belizeans are asking that question, including investors who have invested in creating an authentic tourism product.”
So where does Manuel Heredia stand on the issue of offshore oil drilling? According to Chanona, that question is not about politics or games but one that our leaders should be clear on. “That is a question stakeholders in the tourism sectors, who invested millions of dollars, to make the tourism product what it is today and even tax payers who have contributed to the growth of industry that they should be asking how their Minister stands and BTB. Tourism is an industry in which one in every four Belizeans depends on, and if one in every four will be negatively affected when a spill happens then we need to know where everyone stands on this issue, especially our leaders.”

A draft document for Petroleum Exploration Zones and Exploration Guidelines prepared by the Geology and Petroleum Department identified petroleum exploration concessions in Belizean waters. the document was made available to the public on Monday, January 19th.

For his part, Heredia said his government has not taken a position and they are not considering offshore oil drilling at this time. “I have not said yes or no to offshore oil drilling. Anything that will cause damage to our reef, I will oppose,” stated the Minister. Heredia said that for Oceana to say that offshore oil drilling is catastrophic to the sea, that argument cannot be supported by any evidence. “At this point there is no one from Oceana that can show proof, if anything is done as it relates to offshore oil drilling, that it will damage our reef – there is no evidence of that. They will have to substantiate that if offshore oil drilling is allowed, that it will in fact affect our ocean,” stated the Heredia, who was a fisherman for 30 years.
According to Chanona, the evidence is crystal clear. “I can only point to what has been experience in every part of the world that has attempted to merge tourism and something as adherently dangerous and dirty as offshore oil disasters. I can only point to the countless scientific studies that have been done that oil in marine environment has devastating consequences to marine life, corals and natural beauty. I can only point to the common sense that if we are marketing Belize as a natural beauty destination, that no ones going to pay good money to come here and have a drink and look at the sunset happening over an oilrig. I don’t understand how anyone can say they need more proof than what has happened regionally, what science has shown and what history has shown to understand that oil and water doesn’t mix.”
Oil spills have been at the center of many debates international, especially following the Deepwater Horizon oil spill in the Gulf of Mexico in 2010. In a span of 86 days, 3.19 million gallons of crude uncontrollably spilled into the ocean until it was capped in July 2010. While the effects to the marine life were immediately seen, scientists, researchers and marine biologists continue to study the long term effects of such oil spill. Oceana in Belize has used such examples to bring into perspective their arguments on how catastrophic it could be if ever offshore oil drilling is allowed and worse if there is an oil spill of a similar nature.

El Pescador recognized as 2022 Orvis International Destination of the Year