Home » Environment » Hands Across The Sand against Off Shore Exploration

Hands Across The Sand against Off Shore Exploration


On Saturday May 16th, residents of Ambergris Caye are cordially invited to attend a special event called “Hands Across the Sand”, which will commence at 12 midday on the beach in front of the San Pedro High School (Boca del Rio). It is a global event in solidarity against offshore oil drilling, and it consists of participants holding hands together for a short period of 15 minutes.
According to Oceana Belize Field Coordinator for the Cayes Roxanne Perez Gentle, the message behind the event is to create a sense of awareness in the general public that we need to protect our environment. “We will hold hands to advocate for our natural resources, the water we drink, the air we breathe and our eco-systems. We need to stop depending on filthy fuel and look ahead to a productive clean energy future.” Gentle said via phone interview. 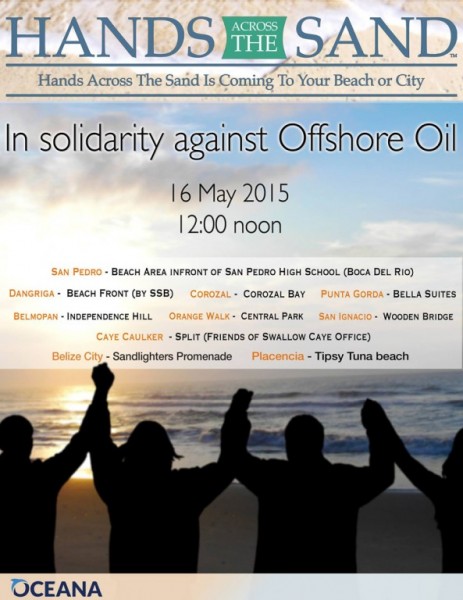 Hands Across the Sand campaign began in 2010, and grew into an international movement after the BP Oil spill in the gulf of Mexico in April of that year. Since then, people come together to join hands and form symbolic barriers against oil spills, and to make a stand against the impact of other forms of hazardous energy.
In the past year, environmentalists in Belize have been protesting against the Government of Belize’s consideration of offshore drilling. While the Government of Belize has not finalized any decision on off shore oil exploration and drilling, the Geology and Petroleum Department has been drafting a Petroleum Exploration Zones and Exploration Guidelines that include off shore oil concessions.

Ministry of Blue Economy on the Sargassum, climate change and carbon emissions