“Say NO to Offshore Oil in Belize” Selfie Challenges GOB


The “Say NO to Offshore Oil in Belize” selfie challenge has received great response in the past month with close to a thousand supporters posting “selfie” photos as a statement against oil exploration. The campaign was launched through a collaboration between Belize’s Coalition to Save Our Natural Heritage, Association of Protected Areas Management Organization (APAMO), Oceana in Belize and other environmental stakeholders to urge the Government of Belize (GOB) to close any, and all considerations of offshore oil exploration.

As part of the initiative, Belizeans and visitors to the country are being asked to take a selfie photos expressing their concern and stance in relation to a draft document for Petroleum Exploration Zones and Exploration Guidelines prepared by the Geology and Petroleum Department. The document, which was made aware to the public on Monday, January 19th, identified petroleum exploration concessions in Belizean waters. Oceana first responded to the document by reiterating the disastrous effects oil spills have had across the world due to offshore drilling.

“The Belize Barrier Reef system provides hundreds of millions of dollars in direct and guaranteed economic benefits via tourism, fishing and storm surge protection. Those hundreds of millions of dollars cannot be dismissed in favor of the mere “potential” of anything else, especially something as dangerous and dirty as offshore oil. History from around the globe has taught us that every country that has attempted to merge tourism, the sustainable development of the environment, fishing and offshore oil has met with disaster. Why are we rushing to risk the known benefits for the mere potential of the unknown and one that will undoubtedly include destructive spills and negatively impact national economics, cultural identity and quality of life? It is our collective responsibility to ensure that Belizean jobs in tourism and fishing will never be compromised; that the guaranteed economic benefits of the protection the reef gives us every year from tropical storms and hurricanes is preserved; that our beautiful horizons will never be scarred by oil rigs; that our crystal clear water will never run black with oil. The situation we confront today is as simple and dire as just that. That this draft policy seeks to initiate “consultation” by declaring open season on Belize’s entire offshore area relying on antiquated data, unreferenced national numbers and vague international standards is unacceptable,” stated Vice-president of Oceana in Belize, Janelle Chanona. 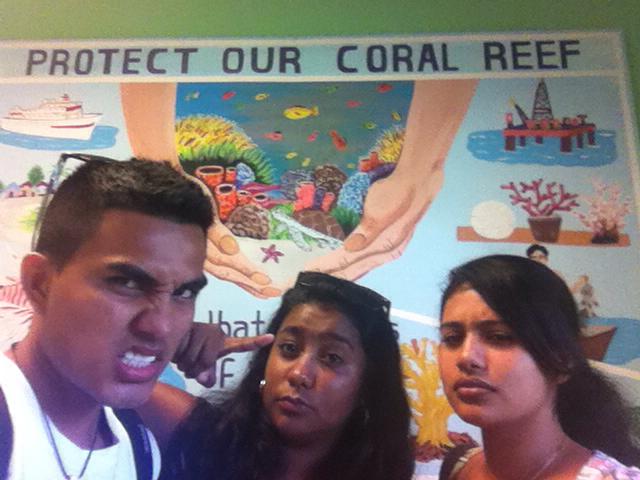 Since the start of the challenge, hundreds have posted selfie photos to social media networks. “Belizeans are making their feelings known! If offshore oil is allowed in Belize, tens of thousands of Belizeans would be displaced when the spill happens! The economy would be crippled and Belize’s world class marine environment would be permanently scarred. Join the call to have the Government declare that there will be no oil exploration or exploitation in Belizean waters. Too much depends on the Belize Barrier Reef System. Spread the word to stop offshore oil,” stated campaign organizers.