San Pedro High School (SPHS) has observed an entire week dedicated to drug awareness from Monday, April 18th to Friday, April 22nd. The theme for 2016 was held under, “The Best Me is Drug Free,” and Guidance Counselor, Ms. Alexis Guerrero, organized a series of events to help influence students to make positive choices and refrain from substance abuse. 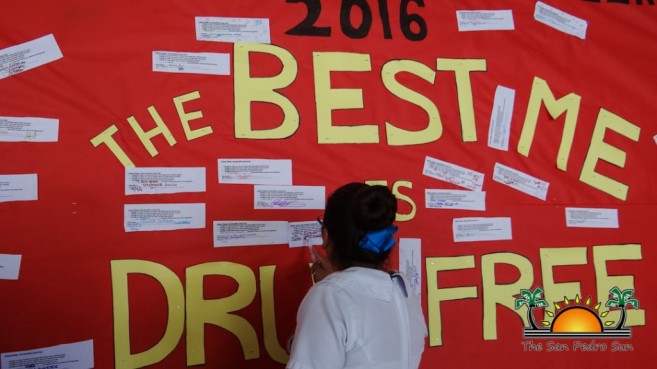 The opening ceremony was held on Monday, April 18th at the Angel Nunez Auditorium. Principal, Mr. Emil Vasquez, gave remarks as SPHS participates in another year of raising awareness on drug and alcohol prevention. “Drugs are not only a problem at SPHS, but country-wide, and I will be revising the school’s policies. I want all of my students to consider their future and their education,” said Vasquez.

SPHS special guest speaker Emily Logan gave a touching testimony reflecting her struggle with drug and alcohol addiction. Emily mentioned that at an early age, she began experimenting with alcohol. She later moved to the United States, where she sought to better her life, but instead, she began using what is widely known in Belize as “crack” or “rock”. “I thought I had this under control, but these drugs took over my life,” said Emily. 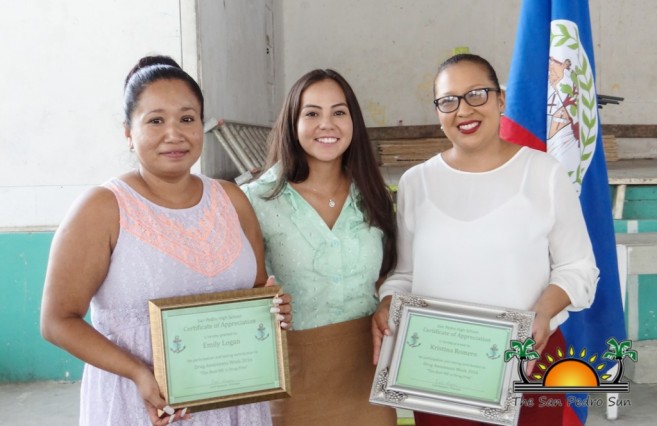 Her addiction grew worse despite having a child, progressing to crystal meth. Emily recalls spending time with toxic friends, and even spoke about domestic violence she experienced. “One day I woke up drunk and I said to myself that this is it,” said Emily. With help from recovery groups, Emily has been sober for the past three years and has regained control of her life. Students Karina Ayala and Marthalicia Vasquez presented her with a token of appreciation.

Throughout drug awareness week, many lectures from NDACC were presented. On Tuesday, April 19th, the entire student body had the opportunity to pledge their commitment to be drug-free. A student assembly comprising of poems, songs, skits, and a presentation by police actors took place on Wednesday, April 20th. Since the SPHS Track and Field team is going for nationals, a Marathon Run that began at 5 AM on Thursday, April 21st, was organized by SPHS as a community event. On Friday, April 22nd, peer helpers visited San Pedro Roman Catholic School and gave a presentation on drug awareness. The SPHS would like everyone who supported them in another successful drug-awareness week.