Another year honoring the Patron Saint of Fishermen: San Pedro


Over the past weekend, islanders ended the celebration of Patron Saint Peter in grand fashion, with both religious and festive activities. From special mass services at the San Pedro Roman Catholic Church to a karaoke competition and lots of live entertainment in between; activities were plentiful. Due to inclement weather condition, some of the previously scheduled events had to be canceled, but, nevertheless there was still lots of family fun.

Among the activities canceled was the first ever Junior Karaoke Competition scheduled for Friday, June 26th to kick off the Dia de San Pedro weekend. Instead, celebrations officially opened on Saturday, June 27th at the Honorable Louis Sylvester Sporting Arena. Speaking at the opening ceremonies was Mayor Daniel Guerrero and Area Representative Honorable Manuel Heredia Jr. Both emphasized the importance of keeping culture and tradition alive, especially that of celebrating St. Peter (San Pedro). St. Peter is the patron saint of all fishermen and the island is still strongly rooted in the fishing industry.
After protocol, the celebration truly started with a great lineup of live entertainment. Those in attendance were delighted with performances by Charikanari Dancers, San Pedro Dance Academy, Palmar Cultural Dance Group and Benque Youth Marimba. Families also enjoyed mechanical rides and lots to eat and drink. After the scheduled performances, it was time for the after party with Rompe Raja and DJ Mauricio who kept the crowd dancing till the wee hours of the morning.

The celebration continued on Sunday, June 28th with an all-day beach party at Boca del Rio Park, which included a fishing tournament and ceviche competition. Residents then moved to the San Pedro Roman Catholic Church for La Alborada, the eve of Dia de San Pedro. The night started with the final novena (prayer service) at 6PM. The novenas had be held from Sunday, June 21st to prepare church followers for the grand day. Live traditional performances by local dance groups and the Palmar Cultural Dance Group then followed. La Alborada ended with the traditional serenade to St. Peter.

Also happening on Sunday night was the Dia de San Pedro Karaoke Competition at the Honorable Louis Sylvester Sporting Arena. Talented island singers took to the stage to compete for grand cash prizes. After rounds of singing it was Desmond Berry who took the first place prize. In second place was Nasa Caliz, while third place went to Dayanara Manzanero.

A live Mariachi Band from Quintana Roo, Mexico, followed the singers and Mexico and a great fireworks display punctuated the evening’s celebrations. Once again, Rompe Raja took to the stage for the after party, much to the delight of attendees. 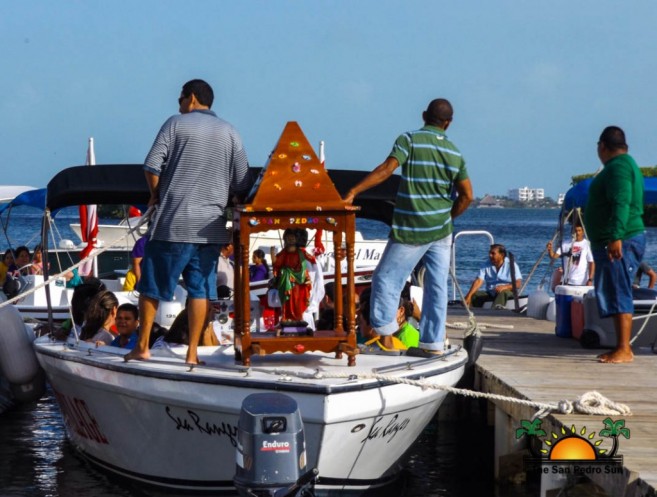 Celebrations culminated on Monday, June 29th with the official day of St. Peter. Residents made their way to the San Pedro Catholic Church bright and early at 4AM for the Misa de Gallo (Fishermen’s Mass). This was followed by a tradition fishermen’s breakfast organized by the San Pedro House of Culture and then a boat procession. During the boat procession, the Catholic Priests blessed participating boats for a prosperous and safe fishing year. Leading the procession was the statue of St. Peter mounted on the bow of the boat. Later that day, at 6PM, an Open Air Mass was held in front of the San Pedro Catholic Church. After the mass, residents and even visitors joined in the closing procession honoring St. Peter.

The San Pedro Catholic Church, San Pedro Town Council and San Pedro Cultural Committee thank everyone who came out to celebrate St. Peter. May he continue blessing the fishermen of San Pedro!