Dia de San Pedro is officially on June 28th, and the San Pedro House of Culture (SPHC), along with The San Pedro Town Council put together a series of activities to celebrate this grand occasion. The annual week-long event honours St. Peter (San Pedro), the Patron Saint of Fishermen of the island, and San Pedranos, along with those who have adopted the island as their home, come together annually to thank their patron for another bountiful year.

Festivities started on Monday, June 20th at the San Pedro Roman Catholic Church, where the SPHC hosted ‘The Alba,’ (first light before sunrise) and provided a fisherman breakfast early in the morning. Following a week of Novenas (a devotion ceremony consisting of prayer) and Exhibitions, on Tuesday, June 28th the anticipated ‘La Alborada,’ (the eve of Dia de San Pedro) took place at 8PM in front of the St. Peter’s statue at the Catholic Church. Both Guillermo ‘Mito’ Paz and the Honourable Manuel Heredia Jr., welcomed the crowd and gave a brief history of the life of Saint Peter and why it is so important to keep the tradition alive. Afterwards, hundreds of enthusiastic viewers enjoyed the cultural presentations by the San Pedro Dance Academy and the Alma Beliceña Marimba group from Soccotz Village. There was even a serenata (serenade) to St. Peter by Javier Castillo’s Mariachi.

The actual day of the anniversary was on Wednesday, June 29th, and activities began as early as 4AM with a fishermen’s mass at the Catholic Church. At the mass, everyone gave thanks for all the blessings Saint Peter has given in the past year to San Pedro Town. The fishers ask for another prosperous fishing year. Following the mass, a fishermen’s breakfast was hosted at Severo Guerrero Sr. house. The original location was the Lions Den, however since it is being use as a Fire Victim Relief Centre, the venue for the breakfast was changed. Shortly after 6AM, all the fishermen gathered in front of the Central Park for a boat procession that began at the municipal pier. At the end of the procession all boats and fishermen were blessed.

Later that day, an open air mass was held at 4PM in front of St. Peter’s Statue and an hour later, the St. Peter’s Procession started. Events continued later in the evening with the opening ceremonies at the Honorable Louis Sylvestre Sports Complex at 8PM. Mayor Daniel Guerrero addressed the audience speaking about how important St. Peter has been for the island and to remember the humble beginnings of the island. In his remarks, the Honorable Manuel Heredia Jr., gave a brief history of the fishing industry on the island and how St. Peter was and has been a strong religious symbol for San Pedranos. Keynote speaker of the evening, Francisco Verde, also touched on the historical part of the island’s Patron. He said that even though tourism has become the dominant industry on the island, fishing continues to play a big role in San Pedro Town. At the end of the remarks by the speakers, Councillor Hector ‘Tito’ Alamilla thanked everyone for coming out and invited them to enjoy the rest of evening as the festivities for Dia de San Pedro were officially opened. There was entertainment, fireworks, Ozzy the Clown, cartoon mascots and face painting. 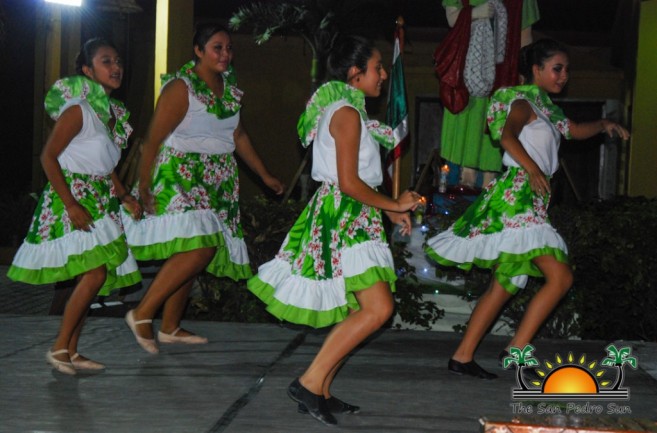 On Thursday, June 30th, celebrations continued with the annual Dia de San Pedro karaoke competition at the Honorable Louis Sylvestre Sports Complex at 8PM. Music was provided by Caribbean Kings and Gaby (winners of the competition).

On Friday, July 1st, the San Pedro Dance Academy, Charikanari Garifuna Dancers, Palma Dance Group, and Rompe Raja will continue the celebration, entertaining the crowd as early as 8PM.
Culminating the celebrations on Saturday, July 2nd will be the Lascelle Martinez Dance Company, the Belize National Dance Company, the Chetumal Dance Company and one of Belize’s greatest bands, Gilharry 7 Band, bringing their great hits to the stage until the wee hours of the night.

Preschoolers shine for Festival of Arts in Ambergris Caye