After its final consultation on February 4, 2016, the Environmental Impact Assessment (EIA) for the North Ambergris Caye Water System and Sewage Collection and Treatment Project has received its preliminary approval. The project is now pending its Environmental Compliance Plan (ECP). The purpose of the project is to enhance the quality of life of the populace of Ambergris Caye while contributing to the protection of the eco-system. In addition, it is intended that it will help support the island’s tourism package by providing quality service to the residents and resorts of Northern Ambergris Caye. 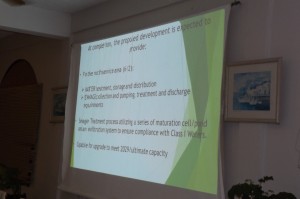 The project has a proposed budget of $60 million which the Government of Belize secured through a loan from the Caribbean Development Bank. The executing body for the project still remains in the hands of Belize Water Services (BWS), while Dillon Consulting Limited is yet to deliver the last design of the project. As soon as this is done, plans for the construction of the treatment plant will start and bids will be open for qualified contractors.
Jose ‘Pepe’ Garcia from Tunich Nah Consultancy stated that it is surprising why it has taken so long to get the green light. “This is a very important project for Northern San Pedro. They urgently need it,” said Garcia. He added that the current practices used by most of the residents and resorts in that area are not the best, and continue dumping waste in the surrounding areas. “When the road was paved, many of the pipelines that would take the waste to the other side of the island were damaged, thus, worsening the situation. So it is urgent for this project to start,” he said.
Due to the many changes made to the plans, the standards for its performance were also changed. According to Garcia, from the studies they made, the present water treatment plant in San Pedro Town is not meeting the required standards. As a result, this new plant that will be built in Northern Ambergris Caye will count with the ‘Class 1 Waters’ standard instead of the Class 2 previously recommended. This will be the first plant of its kind in the entire country of Belize. This upgrade in the water quality standard will provide top quality clean treated water, both beneficial for the environment and humans.
Garcia explained how the system will operate. “The proposed expansion project which entails a development of 12 miles north from the Sir Barry Bowen Bridge will centralize the sewage system that will treat the waters to tertiary levels before the effluents are disposed,” he explained. “This would significantly reduce the severity and extent of impacts to the environment.” He added that the area surrounding the project site is considered to be ecologically sensitive given the extensive coral reef, sea grass and mangrove habitats in the area. For this reason, there is a need to raise the standards of the treatment of effluents for the sake of the environment. However, he also indicated that due to the upgrade of the quality of treatment, the budget of the project might also increase and additional funds will need to be acquired.
According to Garcia the project still proposes to construct a reverse osmosis desalination water treatment plant. It will also include a water pump station, potable water transmission and distribution mains. Another component that remains unchanged is gravity sewers and force main with pump stations and sewage treatment facility. “The monitoring plan made for this project is also helping to assess the effectiveness of the proposed mitigation measures,” he said. “Certainly this will be of great assistance for the scripting of an ECP by the Department of the Environment.” He acknowledge the fact that there will be some changes to the surroundings, but if the project is not executed as soon as possible, the surrounding ecosystem will continue to endure the negative impacts of improper disposal of waste. “The lack of a sewage collection facility is currently causing contamination to the area and the pristine waters of the sea,” he said. “The project is vital for the success of the tourism business in that area since it is developing significantly fast. The accessibility of water distribution and sewage collection will improve the quality of service offered by businesses on that part of the island.
The firms overseeing the project also believe that a similar project needs to be done urgently for the community of San Mateo. Garcia hopes the Government of Belize will consider reclaiming that area and provide some sort of the solution to their sewage issues. They find it unfortunate that this sub-division was excluded from the project plans.