At the seventh annual Ocean Hero Award ceremony organized by Oceana in Belize, two outstanding Belizeans received the prestigious Belize Ocean Hero Award on Saturday, October 5th, in Belize City. This year’s winners are fisherman and sea advocate, Dale Fairweather from Placencia Village and fisherwoman and avid diver, Guadalupe Lampella from Riversdale Village in Stann Creek District. Janelle Chanona,Both were recognized for their exceptional efforts in conserving and protecting Belize’s marine resources, the environment and its creatures for future generations to come. 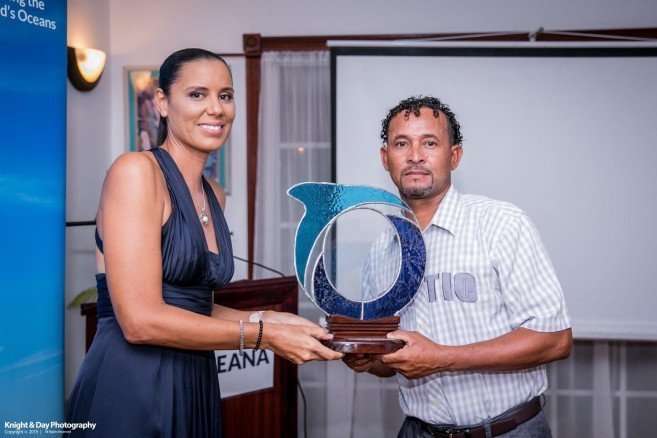 Mrs. Guadalupe Lampella has been diving for conch, lobster, and fish since childhood, quickly realizing that the sea and its bounty would become her lifeline. Growing up fishing in Southern Belize, Lampella has seen the depletion of fish stock throughout the years, motivating her to be an advocate for the health of our marine resources. In 2016, she was recognized as the “Outstanding Fisher Folk” of that year. She has been an active advocate in her fishing community of Riversdale, often expressing the importance of women in fisheries and their role in sustainable fishing. Even today, Lampella urges us to do our part, to have that love for our country and to preserve it so that we can have it for tomorrow. Guadalupe Lampella’s son, Alex Mendoza, accepted the award on her behalf. 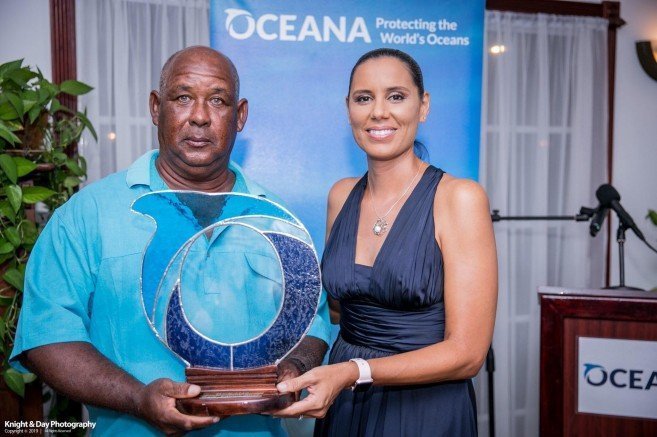 Dale Fairweather grew up in the quaint coastal village of Placencia, an upbringing that inevitably tied him to the sea for life. A fisherman at Turneffe for over two decades, Fairweather has traversed the entire Turneffe Atoll in search of conch, lobster, and finfish using a variety of fishing methods that he has continuously expanded with the changing times. Throughout his career, he has been an advocate for the fisherfolk community, holding positions on the board of the Belize Federation of Fishers as well as the Turneffe Atoll Sustainability Association. In 2012, Fairweather played a critical role in the Turneffe Atoll, receiving its protection status in the Marine Protected Area System. Fairweather also offers his personal time to educating students on the need for responsible management of our natural resources, specifically as it relates to the fisheries sector in Belize. Within his community and across the country, Fairweather continues to be regarded as a voice for the fishers. “I think that everyone should be aware of sustainable fishing practices so that whenever they see that seafood on their plate, they’ll know how it got there, by sustainable fishing and not by just taking everything and just killing everything – the big ones, the small ones, everything – it’s a form of economic benefit for the country also that people know about sustainable fishing,” shared Fairweather.

During the presentation of awards to both honorees, Oceana’s Vice President, Janelle Chanona, commended the Ocean Heroes for their dedication in preserving Belize’s treasure. “Our Ocean Hero Award winners have done amazing things, but they didn’t start at that level. Many of them came from humble or ordinary beginnings, but along the way, someone or something sparked their interest and their action. Tonight we are here to honor two Belizeans who are doing extraordinary things to ensure the future is both beautiful and bountiful. They illustrate that progress and change is within our reach. Their actions and impact show us what Belize can truly do. Ahead of any laws, they recognize that behavior change is not just possible, it’s necessary. Our brave ocean has tried so very hard to take everything we’re doing to it, but it can only take so much. We aren’t crazy for working to ensure that things like clean air, clean water, and biodiversity are passed on to the next generation. Our loved ones have a right to those things. Like the tide, we rise and fall as one.”

An Underwater Classroom for the Day