Territorial Dispute heading to the ICJ?


On October 2nd Belize Minister of Foreign Affairs Wilfred Elrington announced that an agreement has been signed to take the Belize-Guatemala territorial dispute to the International Court of Justice (ICJ). The announcement was made during the 70th session of the United Nation’s (UN) General Assembly on Friday, October 2nd in New York, United Sates of America. Both the Belizean and Guatemalan governments have agreed to host a public referendum to decide whether Guatemala’s claim over a certain area of Belize should be presented to the ICJ for an ultimate decision. 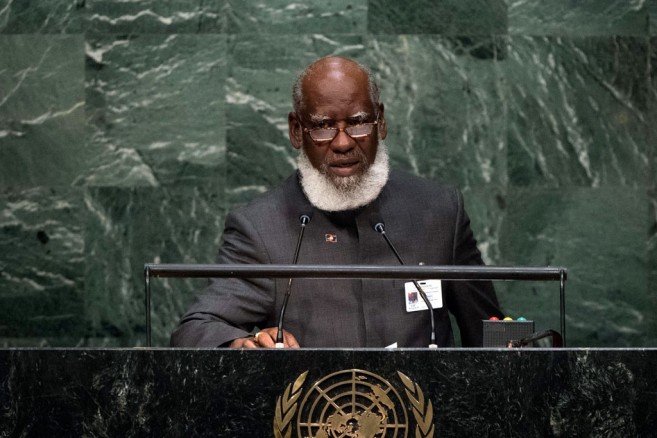 Elrington’s 19-minute speech touched on several topics, including climate change and the country’s development. In the last minute of his speech Elrignton stated, “Earlier this year we signed a protocol to the special agreement between Belize and Guatemala to submit Guatemala’s insular and maritime claim to our country to the ICJ. We expect that this will facilitate and speed up the process to finally and definitely put an end to unfounded claims that have plagued us and our region for far too long,” said Elrington. Reports are that the ‘special agreement’ Elrington refers to in his address was signed sometime in August 2015 by himself and Guatemala’s Minister of Foreign Affairs without the consent or knowledge of the people of either Belize or Guatemala.

Elrington’s announcements have received much criticism from The People’s United Party (PUP) and Citizens Organized for Liberty through Action (COLA). Both entities have publicly condemned Elrington and the current United Democratic Party (UDP) administration, claiming they are violating the people’s right. “The PUP rejects the statement Elrington made on the world stage that the protocol which he signed with Guatemala will, ‘facilitate or speed up the process of going to the ICJ’. The people of Belize have a right to be consulted and have a right to reject such an option and the failure of Elrington to inform the UN that the referendum is required in both countries before any case goes to the ICJ is really a deliberate misrepresentation of the applicable facts of the law and he has misquoted the legal position in relation to the Guatemalan claim and we demand an immediate and public clarification of the record, which must be made immediately,” said PUP Senator, Lisa Shoman.
COLA’s President, Giovanni Brackett stated that Elrington is not working for the best of the Belizean community. “The Foreign Minister has acted recklessly and grossly misrepresented what the peoples of both countries believe and were told about this process from the very beginning. Each time it is mentioned, it must be explicitly stated as a condition of agreement, not implicit, lest people be misled,” said Brackett.
It was originally agreed that a simultaneous referendum would be held in order to let the people decide whether the territorial dispute is to be taken to the ICJ for a final decision. The referendum was first scheduled for October 6, 2013, but Guatemala backed out of the agreement earlier that year. Guatemala then petitioned to amend the referendum agreement to allow Guatemala to hold the referendum at their convenience without the need to be simultaneous. This amendment was accepted by the Government of Belize (GOB) and a document was signed on May 26, 2015.
Since then, the relationship between Belize and Guatemala has only deteriorated with ongoing confrontations at the Sarstoon River.
GOB has yet to issue a formal release confirming or denying Elrington’s announcement, and there has been no further discussions on what the new agreement with Guatemala entails.
To listen to Elrington’s full address at the United Nation’s General Assembly, visit the following link: http://webtv.un.org/search/belize-general-debate-70th-session/4526746747001?term=belize.