« Older: GOB is vindicated for the takeover of IBC and IMMARBE
Newer: » SPTC undergoes reshuffling


On Wednesday, October 19th, the Senate Select Committee on Immigration proceeded with its sitting at the nation’s capital, Belmopan City. At the gathering, Senator Aldo Salazar was appointed as the chairman for the committee. Now that the committee has a chairman, the People’s United Party (PUP) has appointed its representative, Senator Eamon Courtenay. The appointment of a chairman is the start of the investigation regarding the immigration hustle revealed in the Auditor General’s special report on August 27th during a sitting at the House of Representatives. 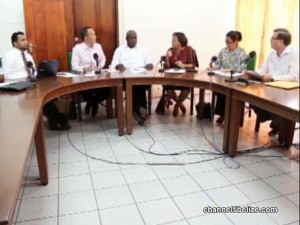 The committee’s membership did not change and it continues to include two Government Senators: Senator Salazar and Doctor Carla Barnett, Minister of State in the Ministry of Finance. Also making up the committee are Reverend Ashley Rocke – Senator representing the Churches and Elena Smith – Senator representing the trade unions. Senator Mark Lizarraga represents the business community, but was not present at the meeting. Courtenay is the most recent addition to the team.
Prior to Courtenay’s appointment, the PUP had called the committee ‘bogus’ due to its advantage by having two Government representatives. With the assignation of Salazar as the chairperson it reduces the Government’s voting power to only one. However, Salazar dismissed the idea that voting was of any significance. “I don’t know that voting was contemplated to be of any significance in the committee, because we would have to have some semblance of agreement by a majority in order to produce a report,” said Salazar. “Every member of the committee is entitled to produce their own report if they don’t agree with the report of the majority, so voting was never an issue.” Salazar will only be able to vote to break a tie in the event that one of the members of the committee is absent or abstains from voting.
Salazar is tasked with shepherding the inquiry all the way to its conclusion. He promised neutrality and fairness through the process. “I will discharge my duties fairly to everyone,” said Salazar. “When it comes to the discharge of duties we will do so without prejudice as in relation to the oath that we all took.”
The post for chairperson had previously been offered to Senator Rocke, but he declined. He stated that he and his family were threatened following a motion he introduced and led through the Senate at its last meeting. Senator Smith was the next in line to take the post, but also declined. “At our meeting we went through the terms of reference that we had been given and we discussed all the matters as it relates to what will be our responsibilities. But on my side we felt that the scope of the terms of reference was not wide enough. Hence the reason why they gave me that mandate that I should not accept being chair of the Committee,” explained Smith.
The Committee is tasked with investigating the findings of the Auditor General’s report in to the Passport, Visa, and Nationality Departments for the period 2011-2013. The budget for the firm has been approved for submission to the Ministry of Finance and it is expected that when the investigation begins, the full participation of Senator Lizarraga will be added to the investigation.
The next meeting has been announced for Wednesday, November 9th, which will be the beginning of the investigation. Auditor General Dorothy Bradley and her team will be the first to be called to testify. After her hearing this is the order of the other persons called for interviews regarding the audit’s report: support staff of the Audit Department; CEO, Director, other staff, the Minister and Minister of State of the Ministry of Immigration and Nationality, all those persons who were in office during the review period.
Since the period during which the fraudulent activities were happening was determined to be from April 2011 to September 2013, some familiar names will also be called out to testify. These persons include Gareth Murillo, Ruth Meighan, Maria Marin, and in particular Elvin Penner.
The PUP believes that there are other persons that should be called to testify, in addition to those that are on the scheduled list. Leader of the Opposition Honourable John Briceño believes that only in this way can everyone be held accountable for their wrongdoings in the scandal. “We know that there are a lot of other people who have been involved in what has taken place in the immigration department,” he said. “It will be very important to call them before the committee so that we could get to the bottom of what happened and to ensure that this would never ever happen again in this country.”
The hearings are scheduled from 9AM to 12 noon, and then from 1PM to 4PM on each subsequent Wednesday, until the process is complete.

Completion Ceremony of the Genetic Improvement in Sheep and Goat Project