With 16 days left before the 2021 Municipal Elections, aspiring candidates with intentions to form the next local government in San Pedro Town were officially nominated on Monday, February 15th. Both the People’s United Party (PUP) and the United Democratic Party (UDP) marched to the Town Council building where their mayoral and councillor candidates were nominated as required by law by registered voters in the Belize Rural South (BRS) constituency.

Returning Officer Martin Alegria presided over the nomination in San Pedro, where all 14 candidates were nominated. 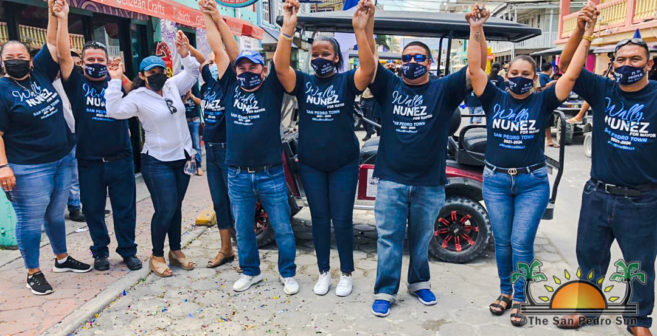 At 10AM, the PUP was the first political party to take part in nominations. Mayoral candidate and previously elected PUP Councilor Gualberto’ Wally’ Nuñez, along with his six councilor candidates, Jose Castellanos, Marina Kay, Adaly Ayuso, Johnnia Duarte, Dianeli Aranda, and Ernesto Bardalez, led a parade through downtown San Pedro. They were cheered by supporters as they headed to the nomination center at the Town Council building. 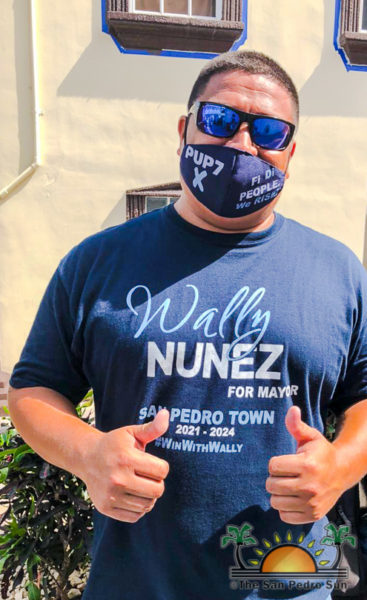 After each slate member was nominated, mayoral candidate Nuñez shared a few remarks with The San Pedro Sun. “We are very excited because we have a strong team, diversified, and people with experience in different sectors of the community,” said Nuñez. “We are bringing some new ideas to the table. We are not coming with big promises but with viable ideas that can be turned into reality.” He added they have heard from the electorates on the island and what people want is a change for the better.

Nuñez and his team were accompanied by BRS Area Representative the Honourable Andre Perez. Perez is optimistic that the PUP slate will win by a landslide as his party did in the November 2020 General Elections. Perez asked the people of San Pedro to remain united despite the current challenges with the COVID-19 pandemic and to support all PUP candidates aspiring to form the next town council. 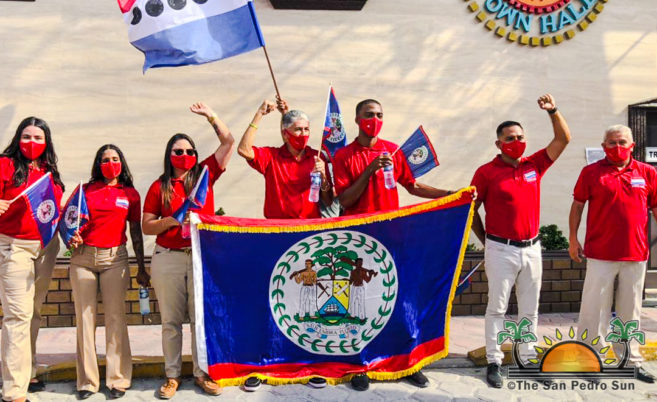 The incumbent town council administration under the UDP is running with a new slate as the current councillors, including Mayor Daniel Guerrero, will not be seeking re-election. The only UDP veteran in the team is mayoral candidate Ruben’ Rux’ Gonzalez, who has served both as councillor and Deputy Mayor. Gonzalez and his slate were nominated shortly after 2PM. The brand new UDP slate under Gonzalez includes Lorraine Reid, Kent ‘Bob’ Gabourel, Raul’ Coco’ Gonzalez, Richard Cordova, Marceli McCorkle, and Jazelie’ Jaz’ Azueta. 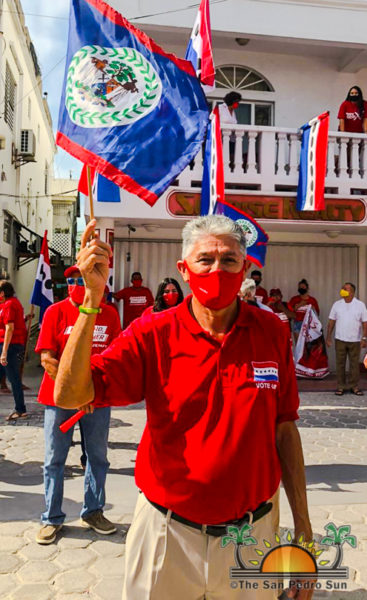 Gonzalez shared with the media that he is ready to continue his administration’s work over the years. He is confident of receiving support from the electorates as much of San Pedro’s development is thanks to the UDP town council. Gonzalez pledged to be a mayor for everyone regardless of their political affiliations.

Mayor Guerrero said it is time to inject new and young blood into the party and believes this new slate can deliver for San Pedro. Most of the issues the island has are the conditions of streets and the problem with garbage. Guerrero said infrastructure has always been a priority, but as he leaves office, bad infrastructure issues remain. Guerrero indicated that street conditions will always be a problem because San Pedro is growing, and development brings all these issues. 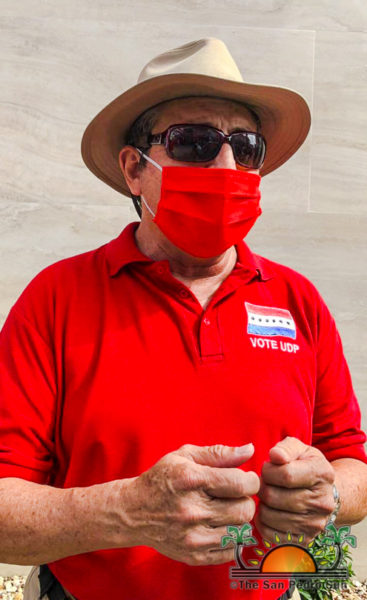 The Mayor said that he is taking a break but is not retiring from politics. As a three-term mayor, he feels accomplished. “We did what we could with the resources we had,” he said. “I feel accomplished during these nine years in office. After each campaign victory, I went color blind as I helped as many people as possible regardless of their religion or political affiliations.” Guerrero believes that people should come first but running a town with the current conditions is challenging, and he wishes the best to the upcoming town council. Guerrero noted that his administration thrived to serve the community during his time in office through devastating tragedies like fires, loss of lives, Sargasso, hurricanes, and COVID-19. He is looking forward to ‘recharging his batteries’ before returning to the political arena.

The 2021 Municipal Elections are set for Wednesday, March 3rd, with voting stations at the San Pedro High School and the Roman Catholic Primary School. All those exercising their right to vote are required to present picture identification (Voter ID, Social Security Card, or Passport) before entering their assigned voting station.