San Pedro Pirates win 2-1 against Police United, back at #1 position in PLB


For the 10th week of the Premiere League of Belize’s (PLB) Closing Season 2019, the San Pedro Pirates F.C traveled to Belmopan City, Cayo District to go up against Police United F.C on Sunday, March 17th. With a 2-1 victory, the island team is back in the first place position with 20 total points. 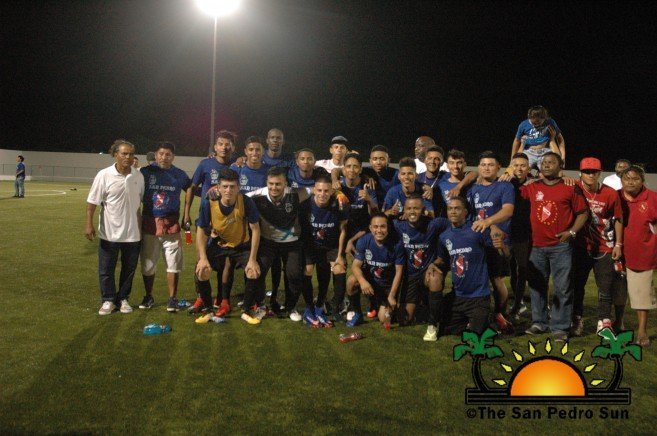 The match kicked off at 4PM from the Isidoro Beaton Stadium in Belmopan City, with both teams determined to win the match and obtain those three additional points in the chart standings. At minute 35, Pirates Facundo Garnier took advantage of a clean opportunity and scored the first goal for the island team. Right before the match went to a break, Pirates Devin Burgess managed to make it to the net and scored another goal. The match went to a break with Pirates leading 2-0.
After the break, both teams came back with strong defense. Nevertheless, Police United managed to score a goal at minute 62 courtesy of Hasan Lucas. The fierce match continued with both teams aiming for more goals, but due to strong defense from both sides, all attempts were futile. The long whistle blew, giving San Pedro Pirates F.C another victory with a 2-1 score.
Other matches taking place throughout the weekend, saw Assassins Altitude winning 4-1 against Wagiya Sporting Club, Belize Defense Force defeating Belmopan Bandits with a 2-0 and Freedom Fighters and Verdes F.C ending in a 0-0 draw.
The PLB current standings have San Pedro Pirates at the top of the chart with 20 points, followed by Verdes F.C with 19 points, Belmopan Bandits with 15 points and Assassins Altitude F.C with 14 points. Following the top four teams are BDF and Police United F.C with 12 points each and Freedom Fighters F.C with 10 points. At the bottom of the chart is Wagiya Sporting Club with eight points.
For their next match, the San Pedro Pirates will be playing at home against Assassins Altitude F.C on Saturday, March 30th. The game is scheduled to start at 7:30PM at the Ambergris Stadium in San Pedro Town. ALL islanders are invited to come out and support the island team in their home game.