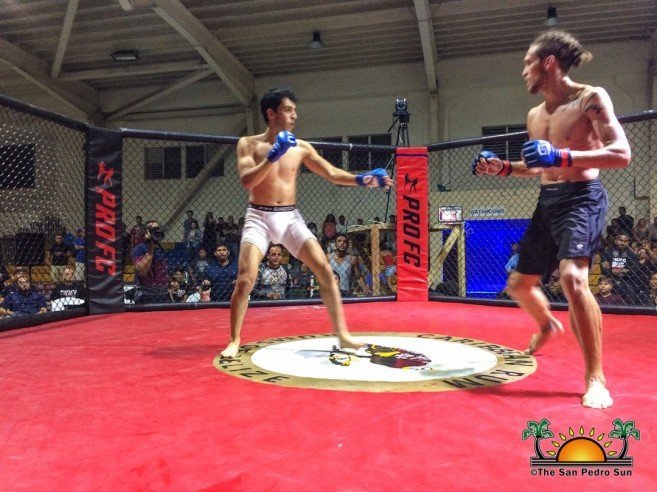 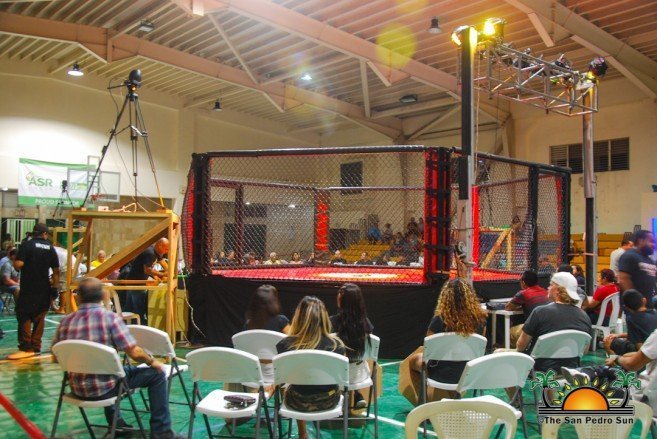 Held inside the Orange Walk Multi-Purpose Complex shortly after 6PM, the venue saw a large crowd of MMA fans, who came to support the competitors.

The three-round matches began with the 145lb category between Belizean Brandon Rojas and Mexican Aldo Gabino. Gabino was able to overcome Rojas defeating him via technical knockout (TKO). In the Catchweigh group, Belizean Jared Ramos fell short against Noe Perez of Mexico in the second round. The competition then moved to 155lb division where Belizean Hussan Martin took on Mexican Javier Rodriguez. Martin started the fight by throwing several punches in an attempt to subdue his opponent for the win, but after a grappling struggle on the ring floor, Rodriguez took the victory via submission. 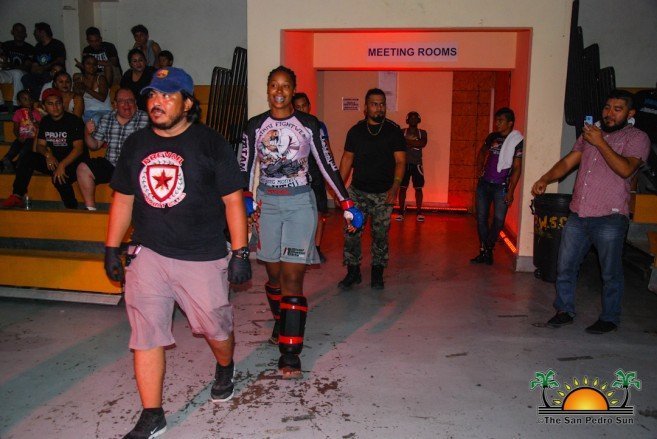 The crowd noise soared when the female match was announced. Belizean Ajee Gabrouel was dominant during the fight against Mexican Janetti Delgado. Both showed their MMA skills in the ring and Gabrouel was in good shape by the end of the second round. In the third round, she continued dominating the fight, but Delgado then saw the opportunity to apply an armbar and won the fight by way of submission. 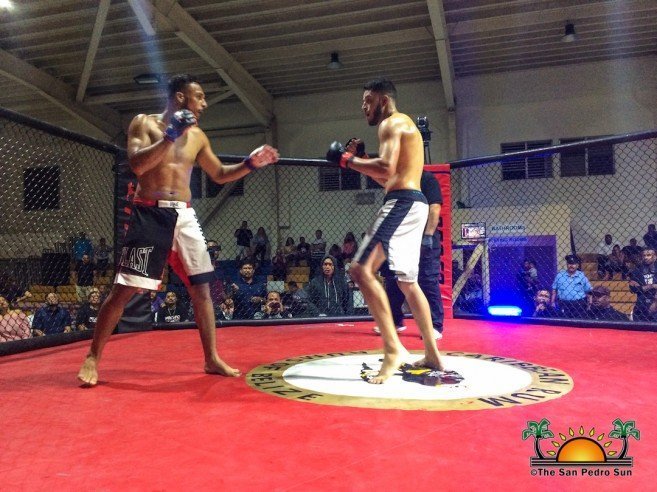 The following match was between Sergio Mar and Leonel Araujo, both from Mexico. The flight lasted the entire three rounds, and at the end, Mar emerged victorious via split decision. 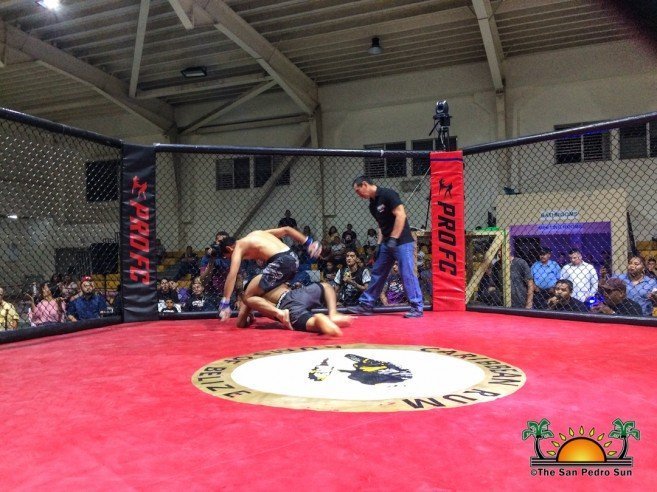 After an intermission, the Belizean fighters returned to the ring with Amiel Topsey falling short against Mexican Darwin Perez. The following match saw another Belizean, Richard Rubio stepping into the ring and going against Mexican Herbe Zetina. Rubio showed dominance from the first round, and the fight turned heated in the second round drawing loud cheers from the audience. Before the second round came to an end, the referee had to stop the fight, and Rubio gave Belize its first win. The following match was another intense battle between Belizean Alex Marin and Guatemalan Brandford Perez. Belizeans inside the multi-purpose complex were ready for another win, but their hopes were thwarted after Perez won the fight by TKO. 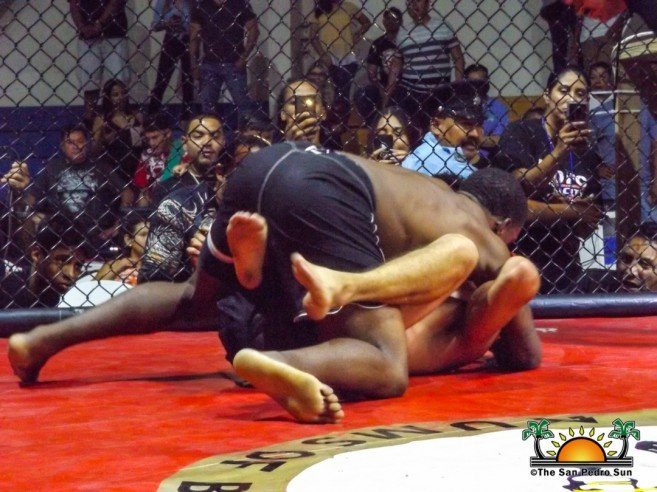 After another intermission, it was time for the co-main event between islander Bryce Peterson and Guatemalan Andy Rivas. 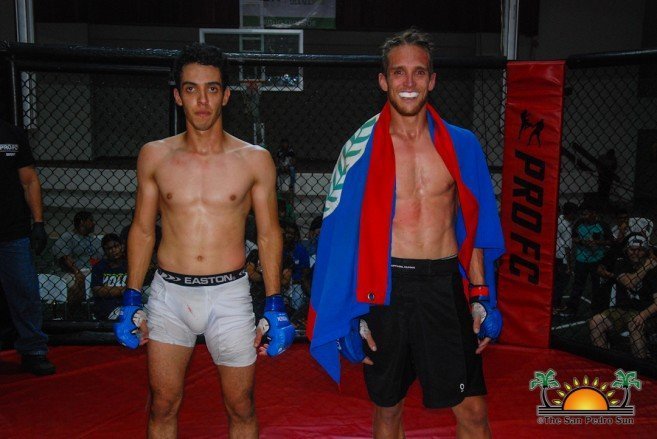 A group of fans from Ambergris Caye cheered on Peterson, wishing him the best. From the beginning, the match was full of energy. Rivas almost overcame Peterson in the first minutes. But a determined Peterson quickly made a comeback grappling and wrestling with his opponent in search of a submission. 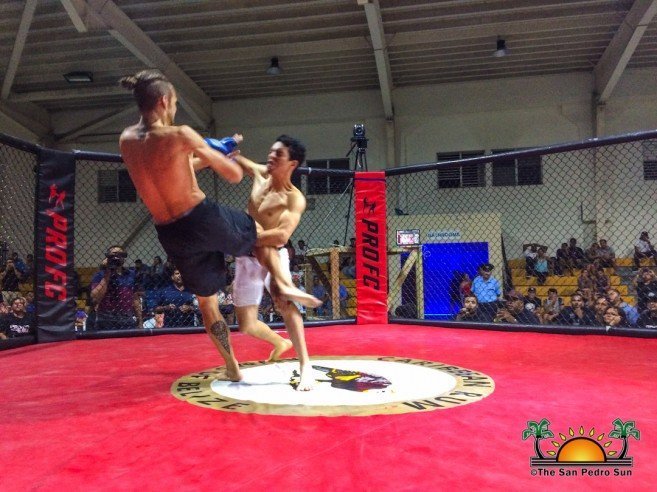 This did not happen, and both fighters went until the last minute of the final round, not giving up and fighting to the bitter end. When the results from the judges were in, Peterson was declared a winner by split decision. It was a celebration that made islanders and Belizeans proud for the second victory of the night for Belize. Peterson acknowledged that it was a tough fight, and even for a moment thought it would be over in the first round, but his perseverance prevailed at the end. 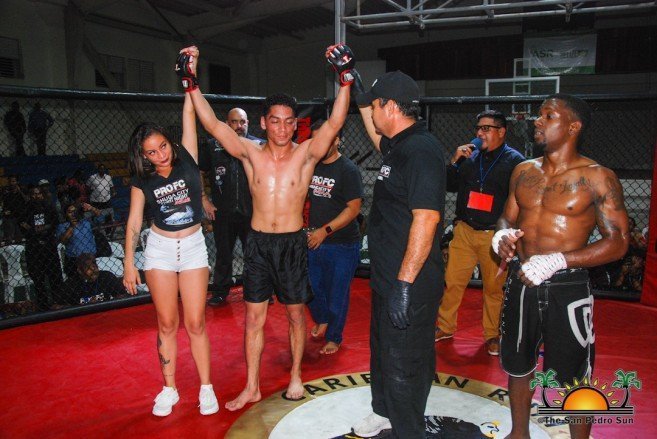 Immediately after, the main event of the evening saw a confident Belizean Kristian Usher contending the title match against Guatemalan Jonathan Chutan. Things were looking good for Usher and for the first two rounds he was on top of the match. In the third round, Usher’s chances of winning the title increased as he subdued Chutan on the corner of the ring trying to get a submission, but this never happened and in a quick move, Chutan grabbed his arm. Usher tried to free himself but fell victim to a strong armbar that forced him to tap out. Chutan was then declared the champion of the tournament and was awarded the championship belt. 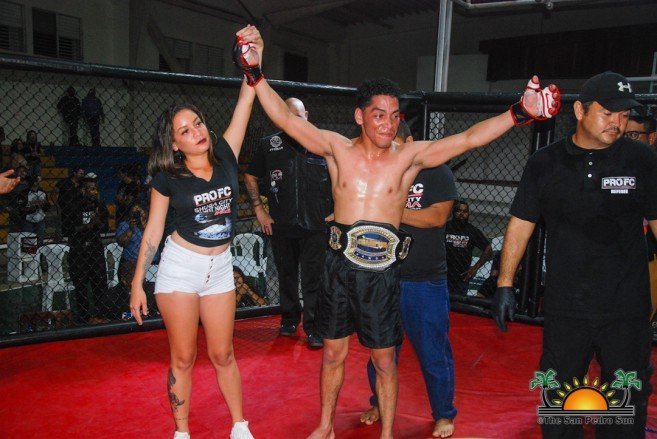 Organizer Silvino Riverol said that the event was a success, especially as this was the first time an event like this has been held in Orange Walk. He announced that they are planning to host an event on Ambergris Caye in June with Belizean and international fighters. Riverol thanks the competitors and everyone who came out and supported the event. He also extends a BIG thank you to the sponsors, who made the event possible and made Shugah City Fight Night an event to remember.

The San Pedro Sun joins the island community in congratulating Bryce Peterson on his incredible victory.