The culture of Mixed Martial Arts (MMA) is gaining popularity on Ambergris Caye, with many islanders showing interest in the sport. The growing MMA fever has given room to international events on the island, with the latest held on Friday, May 17th at Caribbean Villas Beach Result ort. The fight night, named ‘Beach Brawl,’ exceeded everyone’s expectations and saw 11 fights involving Belizean and Mexican fighters in various categories. The event concluded with two main events that saw Mexican competitors claiming the two title matches of the night. 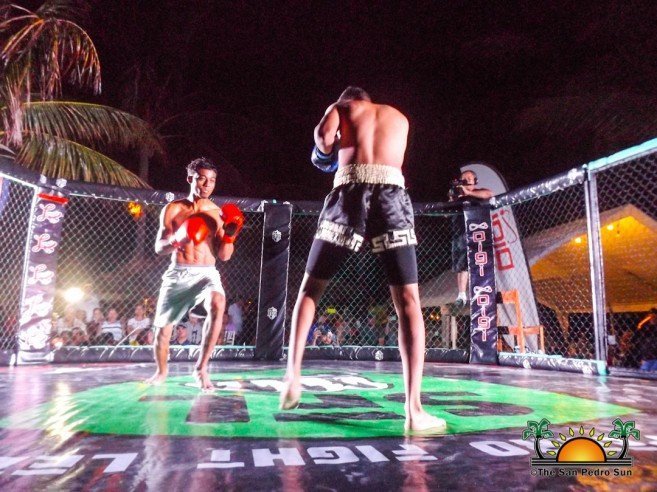 The anticipated and first ever beach brawl was organized by the recently established San Pedro Fight League (SPFL), founded by MMA fighter and instructor Martin Dawson and island resident Felipe Sansores. The event saw a packed venue, with hundreds of islanders supporting their favourite fighters. As the clock ticked 7:30PM, the first contenders stepped into the cage. Mexican Geovany Hernandez easily overcame Giovannie Yu from Belize by submission in the first round in the Jiu-Jitsu division. Immediately after, Marvin Garcia gave Belize its first victory against Mexican Alejandro Gomez by technical knockout (TKO) in Kick Boxing. The Mexican group caught up in the following match as Gustavo Viveros defeated Luis Blanco from Belize by way of TKO in Mixed Martial Arts. 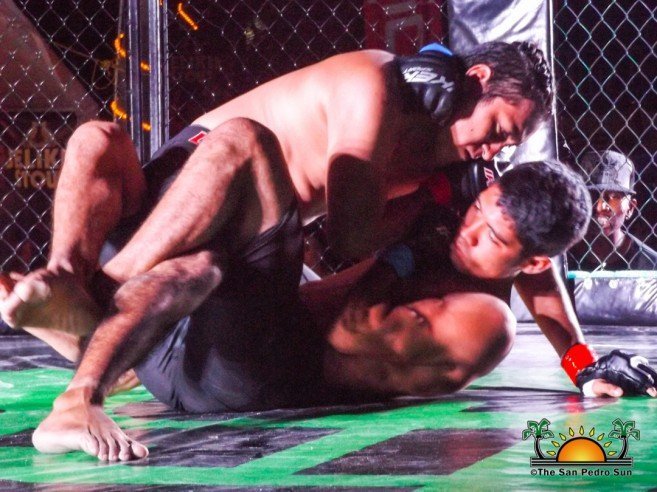 The following fight was in the MMA category between Belizean Luis Olivarez and Luis Ochoa from Mexico. The fight was over in the first minute and Belize tallied another victory by way of TKO. The fifth fight of the evening, was between two Mexican fighters, Gabriel Rodriguez and Pedro Jimenez in the MMA category. This match went until the third round and at the end Rodriguez emerged victorious via TKO. 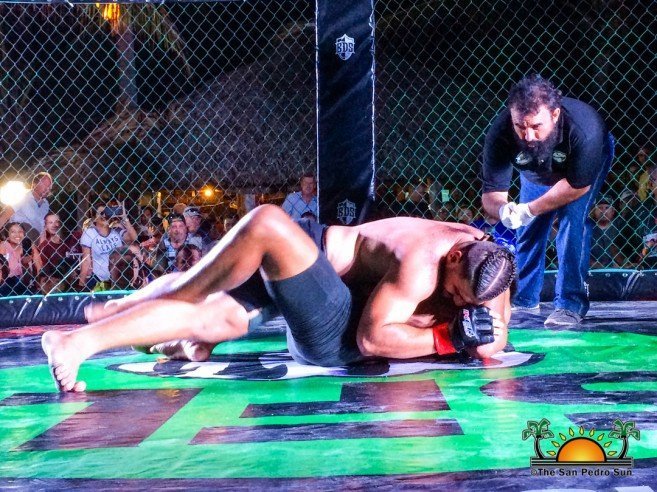 After a short intermission Belize was again represented in the cage with Tyson Alvarez taking on Jose Lopez from Mexico in MMA. Alvarez had a good start hitting Lopez with a few solid kicks, but the Mexican was in no mood to take the fight beyond the first round. In an opportunity, he took Alvarez to the floor and applied an armbar winning the fight by submission. The following match saw two Mexican competitors, Juan Card against Raul Giron in the Jiu-Jitsu division. Card ended the fight in the first round after applying an arm choke on Giron, who was forced to tap out. The following fight saw the return of Marvin Garcia taking on Julio Cesar from Mexico in MMA. Garcia could not yield a second win after tapping out to Cesar’s arm triangle in the first round. 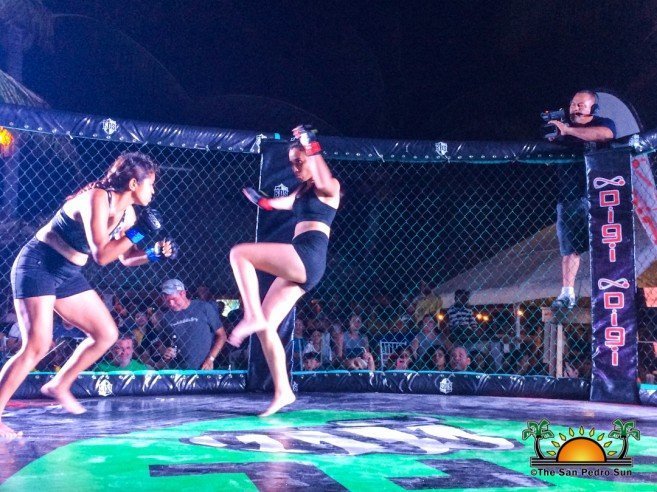 Before the main events, a second intermission took place with several spectators winning fabulous prizes in a raffle. Afterwards, one of the most hotly contested fights of the evening rocked the cage and the venue, when Belize’s Omar Alyakhni took on Mexican Brayan Moctezuma. Both fighters drew loud cheers from the crowd throughout the three rounds of the match. After a physical encounter that saw the best of both fighters, judges tallied their score, and declared Alyakhni the winner by split decision. Alyakhni fans poured inside the cage to celebrate his victory, while outside the cage the crowd cheered and commended the Belizean fighter. 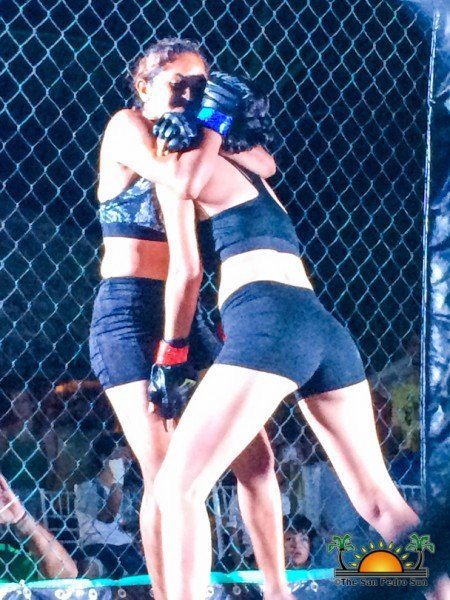 After another intermission, it was time for the Co-main event of the evening, with two Mexican female fighters seeking the title of Straw Weight. Karina Cortez AKA ‘La Chica Maravilla’ faced Perla Morales AKA ‘La Jefa’ in a fierce three rounds. Seconds before the third round was over, Cortez found the opportunity to subdue Morales and applied an arm bar, stealing the victory by submission. Cortez was officially declared the champion and awarded the coveted championship belt. 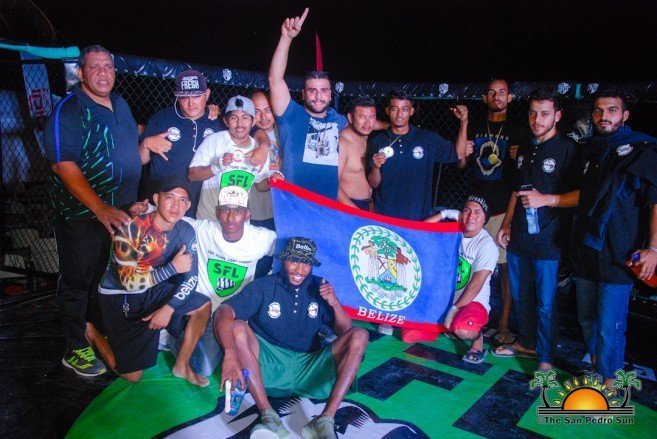 The last intermission saw more giveaways and the announcement of the main event of the evening for the Light Weight Championship, between Belizean Allen Cawich and Mexico’s Renato Perez AKA ‘El Rojo.’ A confident Cawich took on Perez aggressively, counterattacking him at every chance. People cheered loudly as Cawich seemed to be strategizing to overcome his opponent. However, Perez cornered Cawich and subdued him on the floor, where he began beating on the Belizean fighter. Cawich made his best efforts to make a comeback, but he was unable to get Perez off him and the fight had to be interrupted by the referee. Perez was declared the winner by TKO and was awarded the championship belt.

Dawson and the SPFL deemed the event a grand success and announced that the next Beach Brawl will take place in August. They invite all interested persons in the MMA sport to continue supporting these type of events. A BIG thank you goes out to everyone who attended the first Beach Brawl fight night. They also thank all sponsors who made the event possible and for believing in this new sporting discipline on the island.