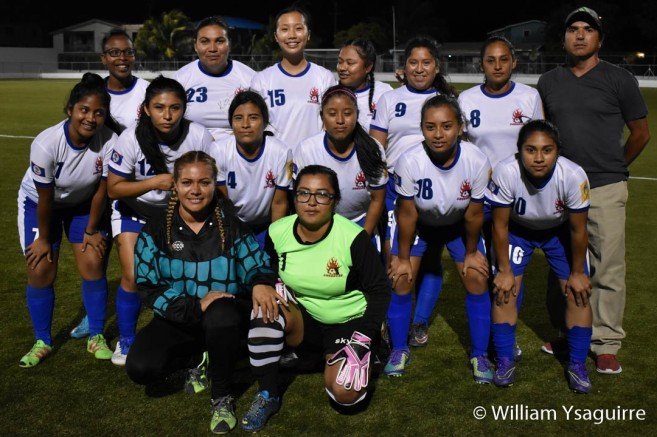 The match began at 1PM with both teams going on the offensive and seeking the victory. At minute seven, Yahayra Alarcan scored the first goal for Verdes Rebels. Few minutes after, Alarcan managed to nail a second goal for her team. With the early scoring, San Pedro Invaders upped their defense, but at minute 36 Verdes Alarcan, landed her hat trick. Not satisfied as yet, one minute after, Verdes’ Alarcan, got another opportunity and scored her fourth goal for the match. The match then went to a break, with Verdes Rebels leading 4-0.
After the break, San Pedro Invaders once again tried their best to defend while attempting to score. Nevertheless, Verdes’ Vicky Ponce made her way to the net and scored another goal for her team, taking the score to a 5-0 lead. The island team also had many attempts to score goals but all were unsuccessful. When the long whistle blew, it was a clear 5-0 victory for Verdes Rebels F.C
The NAWL current standings in the North Side have Verdes Rebels at the top with nine points, followed by Maya Hills Royals, Guardians and Gladiators with three points each. San Pedro Invaders and Santa Elena Strikers are yet to make it on the chart. For the South Side, Jewel Fury Bandits and Rumberas are at the top of the chart with six points each. They are followed by Altitude Chicks and Stann Creek Jewels with three points each. Yet to make it on the chart is Toledo Divas and Dangriga Warriors.
This week, San Pedro Invaders rest. Their match schedule for the next week is yet to be announced.