After much controversy, the Belize Sailing Association (BzSA) Board of Directors has voted to allow current Belize National Optimist Champion, Blanca Velasquez from participating at the International Sailing Federation (ISAF) Emerging Nations Youth World’s Championship Regatta. Velasquez received the opportunity to participate at the championship after attending the ISAF Laser Clinic in Antigua and Barbuda in July 2015, where participants were awarded scholarships. Scheduled to take place from December 27, 2015 to January 3, 2016 in Langawi, Malaysia, the championship sees the participation of sailors from across the world and provides a once-in-a-lifetime opportunity for youth. 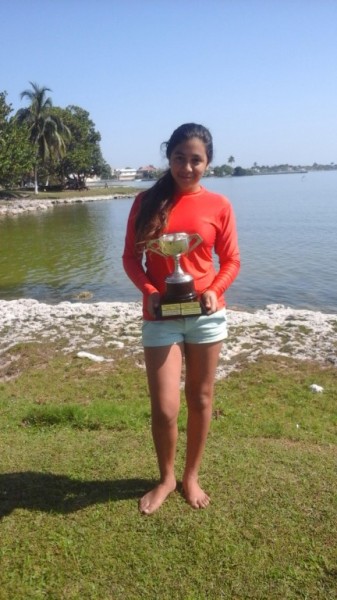 Initially. BzSA has highlighted several reasons for not allowing Velasquez to participate, but the San Pedro Sailing Club (SPSC) believes none are substantial. In an email to all member sailing clubs, BzSA sought opinion from the individual clubs on the decision they had taken. “At the beginning of the year BzSA was fortunate enough to be offered two scholarship places for sailors to attend a clinic in Antigua and Barbuda, Eastern Caribbean. This later manifested the decision of ISAF that the places be awarded to a boy and a girl. Training and Trials were held in San Pedro with the outcome after a number of races resulting in Antonio Ricardez Jr. as Best Male and Blanca Velasquez as Best Female. Velasquez was the only eligible female in the group. The sailors duly went to Antigua for the experience of a lifetime. For a number of days Velasquez was unable to sail the Laser Radial and was required to sail the smaller laser. The basic reason for this is that she is 104 pounds (lb.) and not the recommended 121lb for this rig. The clinic is for sailors of the laser radial rig and the board felt that she was not capable at this time of meeting the requirements of the Malaysia competition. In addition, a video was widely circulated showing that on one capsize the centerboard was not properly rigged and fell out. The trainers requested BzSA to remove the video from several sailing clubs as they felt it did not promote sailing and it was felt that taking a boat that was not rigged properly demonstrated poor judgement by the sailor considering her number of years of experience. It should also be a consideration that Vasquez has an injury with her knee,” stated BzSA Chair, Sharon Hardwick. BzSA is ISAF Member National Authority for Belize and thus is in charge with confirming the sailors’ participation at such events.
But SPSC has indicated that BzSA actions are only serving to sabotage the sailors as they had rightfully earned those scholarships. “Anyone should realize that a 14 year old girl (now 15) is going to continue to grow and gain weight. And if she had a hurt knee two months ago it was bound to heal. At this time Blanca has exceeded the 121lb limit and her knee is fully healed. Because she was lightweight and it was very windy in Antigua and Barbuda she had a difficult time with the conditions, but in Malaysia the conditions will be perfect as it will be calm seas and wind will be between 4-6 knots. Velasquez showed tenacity and courage when her vessel capsized at the ISAF Laser Clinic,” said Amanda Syme, secretary of SPSC.
It was further explained that the deadline to submit confirmation for the scholarships of both Velasquez and Ricardez was on September 11th. “We are unsure if ISAF will be able to extend the deadline. The scholarship was awarded by ISAF and there is no cost to be borne by BzSA. The clubs, families and sponsors have already committed to paying the additional expenses involved with sending both sailors together with the costs of a professional coach. BzSA, as the Member National Authority was expected to merely rubber stamp the acceptance of the scholarships. The Youth Worlds Championship is a stepping stone towards eventual participation in the Commonwealth Games, Pan American Games and ultimately the Olympics.
The opportunities of travel, the experience of meeting youth leaders/sailors from countries around the world who all have a passion for sailing and being exposed to the global sailing culture is crucial for the sailors to make useful contacts in the sailing community. More importantly, regardless of ranking in the championship, many of the participants are offered college scholarships and job opportunities in the sailing world,” said Syme.
In a press release issued on Monday, September 14th, SPSC’s Commodore Andrew Milner asked for support from the sailing community on this incident. “Why did the Board of Directors of BzSA deny our Belizean youth permission to accept and utilize these scholarships? These children have lost the opportunity of a lifetime. Attending the ISAF Youth Worlds Championship is a stepping stone toward Belizean sailors attending the Olympics. Velasquez and Ricardez have trained for five years to achieve their successes and they earned the scholarships. The positive impact of traveling, meeting children from different countries and cultures that are united by the love for sailing is educational and empowering. It is unconscionable that the BzSA board refused Velasquez the right to accept the award and squandered Ricardez’ chance of attending also,” said Milner.
But on Thursday, Spetember 17th BzSA issued a press statement in which they indicated that Velasquez would be allowed to participate. “The Belize Sailing Association Board reconvened to
reconsider the matter concerning our sailor Blanca Velasquez to attend ISAF Youth World
Championship in December, 2015. The BzSA Board members voted unanimously to officially sanction the attendance of Ms. Blanca Velasquez at this event along with team-mate Antonio Ricardez Jr. After much deliberation the BzSA Board agrees both candidates are ready and are expected to conduct themselves appropriately and represent Belize to the best of their ability. The BzSA Chairwoman will be the head of the delegation,” stated the release.
ISAF has extended the deadline until for BzSA to confirm attendance of the sailors to Friday, September 25th.