The theft of golf carts in San Pedro Town has left many islanders without their valuable vehicles. In most cases, cart parts are removed and sold on the island and reportedly even in other municipalities. Police investigations have led to the arrest and charge of Tyrone Chavarria. He was arraigned at the San Pedro Magistrate Court but is currently out on bail. 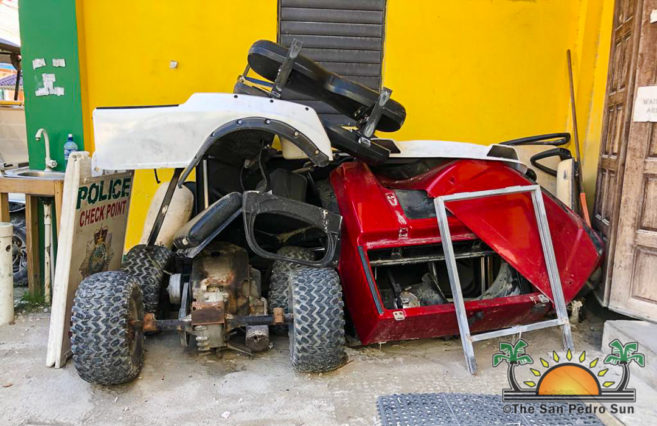 Police have placed collected evidence outside of their station on Pescador Drive, which consists of various cart parts, including roofs, seats, and wheels. Over the past weeks, several golf carts have been reported missing/stolen, affecting private and commercial owners. Most of the thefts reportedly happen at night. In most cases, the shell of the cart is found in bushy areas without the engine, batteries, windshield, and sometimes even the wheels are removed. The parts are sold to the black market, which continues to support this criminal ring of activities.

Police appeal to the public not to support such illegal activities by refusing to purchase suspicious vehicle parts. Anyone suspecting they are being offered stolen property is encouraged to personally make a report to the police station at Pescador Drive next to the downtown Belize Telemedia Limited tower. The island police formation can also be reached at phone number 206-2022, and anonymous reports can also be made online to Crime Stoppers Belize at https://www.p3tips.com/.