« Older: Accused murderer Donald Heredia out on bail
Newer: » After more than a year in prison for manslaughter, Caye Caulker police constables released on time served


24-year-old Caye Caulker resident Shaquille Rogers has filed a legal complaint against a police officer attached to the Caye Caulker police formation, after claiming abuse by the officer while in custody. Police have not commented on the issue, but the matter is under investigation and Rogers is expected to appear at the San Pedro Magistrate Court on Friday, July 26th, where he will present the evidence of the abuse he allegedly suffered at the hands of the police officer. 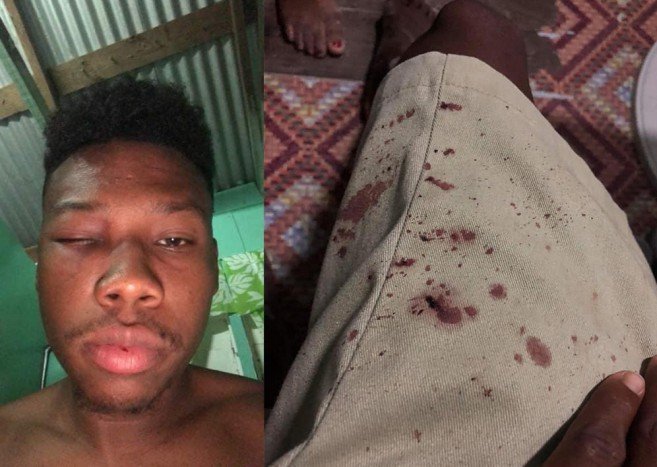 According to Rogers, around 2AM he was socializing with some friends and then went to a food vendor to order wings on Luciano Reyes Street. He recalled that a woman police officer was trying to make an order. Rogers said he gave her the go-ahead to order before him and believes that this might have caused some misunderstanding. Rogers mentioned that the woman police officer called the members of a patrol that was passing by the street. “When she called them, they came straight to me,” he said. “One of the police officers approached me in a very hostile manner,” Rogers said that he was hit on his leg and this prompted him to react in a hostile manner as well. He was detained and taken to the police station.
At the police station, Rogers was accused of assaulting a police officer and for sexually assaulting a woman police officer. He once again reacted to the accusations and claim that he was hit on the face. An altercation ensued with the officer until he was subdued, handcuffed and taken to a cell where he claims to have been beaten for about two minutes. “I was left there bleeding until in the morning,” said Rogers. He was left with a swollen right eye. Before he was released, he said that cops offered to take him to the clinic, but he refused and sought medical attention by his own means. According to him, a doctor in Belize City certified the injuries as wounding.
Rogers told The San Pedro Sun that he admits having been wrong by verbally and physically retaliating but believes that the beating was unnecessary.
Rogers has secured the services of an attorney and feels confident that his case will stand out in court.
The SPSUN will continue following this developing story.