A most anticipated report card for the Meso-American Barrier Reef, with most of its extension along the coast of Belize, was officially presented on Wednesday, January 10th. The scorecard gave the Belize Barrier Reef a fair grade, showing a modest improvement and bringing its health index to 2.8, up from 2016’s 2.5. According to entities like Healthy Reefs for Healthy People, who work on the annual report, this puts Belize in the regional average in their efforts to preserve the reef and remove it from the UNESCO’s World Heritage ‘in danger’ list. However, despite the good news, there is a lot of work to be done in order to salvage one of the country’s most sensitive assets. 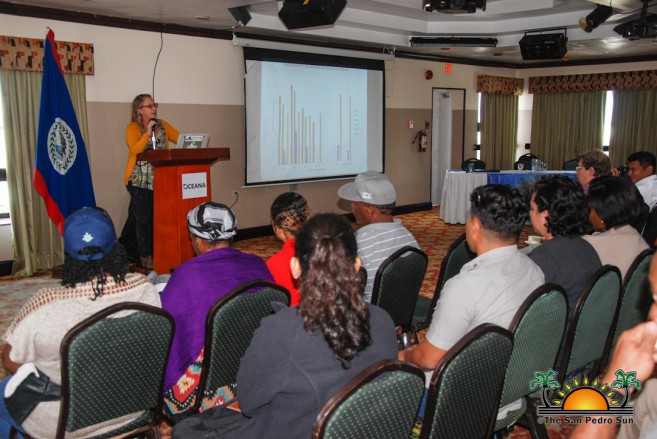 The Belize reef system provides enormous economic benefits for the country, especially in terms of tourism. The report shows that just a minimal portion of this World Heritage Site contributes up to $19 million in revenues on an annual basis from the tourism sector. The report was conducted along the stretch of reef that runs parallel to the coasts of Mexico, Belize, Guatemala, and Honduras. According to the presentation made by Director of Healthy Reefs, Dr. Melanie McField, among the 319 reef sites surveyed, 1% was in very good conditions, 13% scored as good, 32% fair, 37% poor and 17% was found in critical conditions. McField pointed out that Honduras had the highest reef health index of 3.0, followed by Belize and Mexico with 2.8 and Guatemala with 2.0. 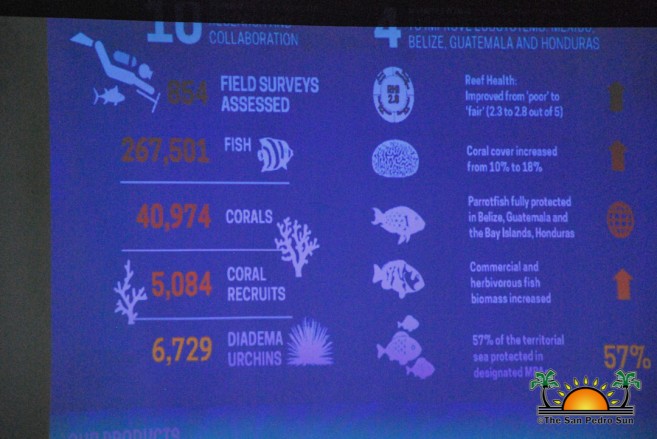 In Belize, 94 sites were surveyed in an effort to identify the threats to the Belizean reef system. The studies showed that coral cover, herbivorous fish biomass, and commercial fish biomass have shown improvement. However, flesh macroalgae cover is still a problem. McField explained that the macroalgae are plant-like organisms that tend to overgrow, replacing seagrass and coral reef habitats. “Coral cover has increased,” said McField. “This is an indicator that we don’t want to see, the overgrowing of algae can make the coral look fuzzy and brown. There has been an increase in the Parrot Fish species which helps with this problem, but the population is not enough to reduce the situation.” 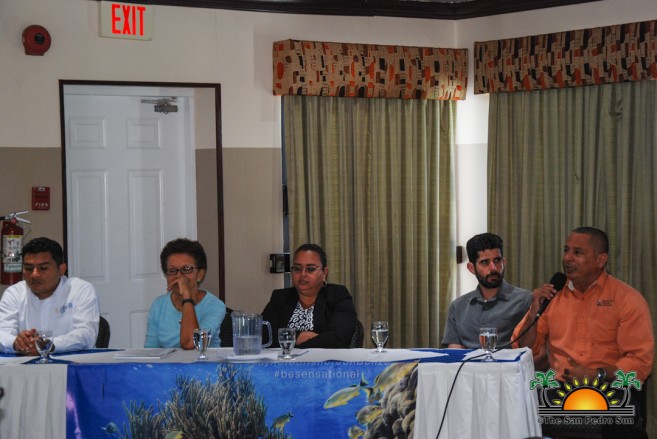 McField indicated that Belize needs to seek other alternatives, including a long-term sea urchin population that could help reduce the presence of the macroalgae as well. “We have seen that in some areas sea urchins have come back, so we are going to look at scientific methods in how to help that urchin make its way back at a faster pace,” she said. “Also, the Caribbean King Crab is an excellent herbivore and if we get to bring it back, maybe through aquaculture, then we could potentially have less of that alga on the reef,” McField says that one of the main contributors to this alarming situation is that sewage treatments are not being improved over the time frame of the report. 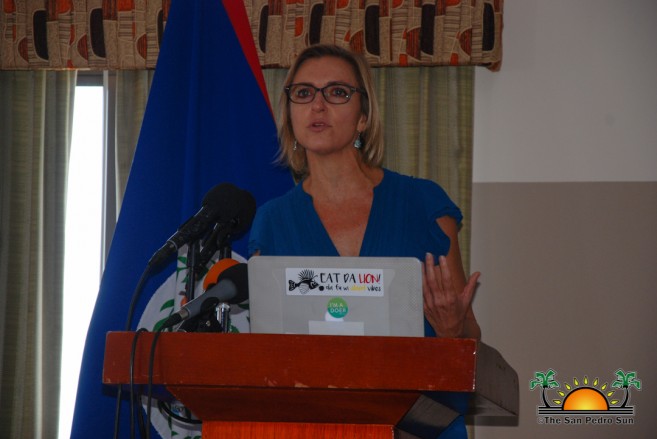 “You have all these nutrients, and the sewage treatment actually has viruses and other pathogens in it, that is what leads to the algae overgrowth,” said McField. She noted that this is one of the main factors that has been damaging the coral. The creation of more replenishment zones, intensive public awareness and enforcement of illegal fishing laws would continue improving the health of Belize’s reef. “We now have 47 protected areas in the whole region, which covers 57% of the territorial seas. But only 3% of this is fully protected,” McField said. “Fully protected replenishment zones have proved that they work. Big reproductive fish are primarily found within these zones and they are critical for the sustainability of these ecosystems.” 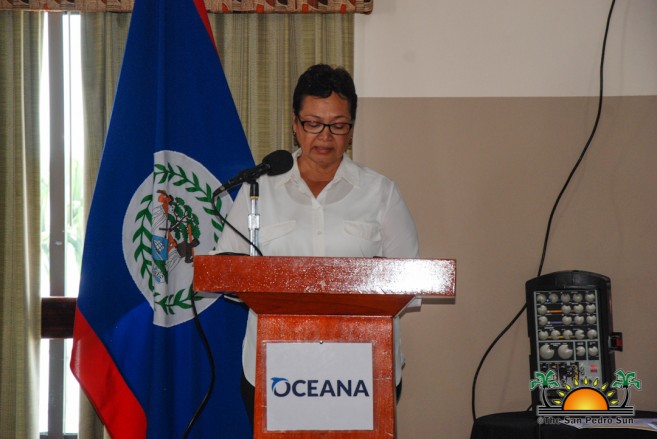 Another aspect of the report included an update on coral bleaching in the reef. Lisa Carne, Director of Fragments of Hope, stated that the problem is serious. The bleaching index shows that it has increased from 36% in 2015 to 49% in 2016. “This is the most severe bleaching we have seen since 2010,” said Carne. “The cause being elevated sea temperatures and its duration affected by climate change, but what we can do as a nation is to monitor and focus on the sites that are more resistance to bleaching than others.” She added that this is the method being done in southern Belize, which is showing positive results.
Vice-president of Oceana in Belize, Janelle Chanona welcomed the fair grade the Belizean reef system obtained in the report, but she believes that more can be done. 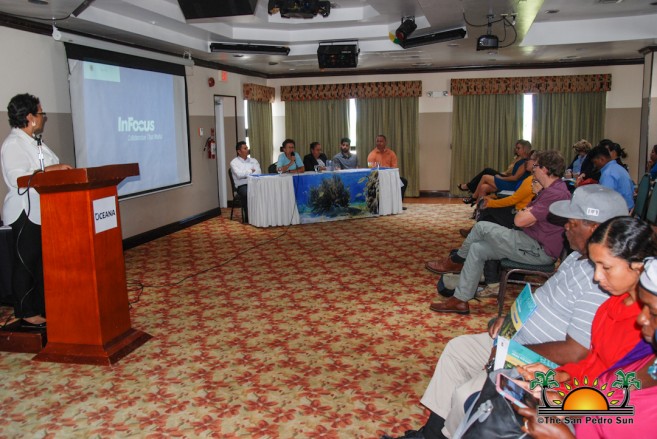 “We should take note of this grade as we are doing better,” she said. “I am really working towards the day when all of Belize’s marine assets can be in the excellent category because the health of our reef is essential for everyday lives.” She asked Belizeans to get informed about the regulations and take note of changes that affect the country’s natural resources. “We know what Belizean unity can do, and if together we can all play our role in making the Belize Barrier Reef as strong as it needs to be, then that is better for all of us.” Chanona also took a moment to celebrate the move from the Government of Belize to permanently ban the offshore oil explorations in Belizean waters, which adds to the effort to continue protecting it.

Belize permanently suspends offshore oil exploration to protect the Barrier Reef
On Friday, January 5th, Belize unanimously passed the Petroleum Operations (Offshore Zone Moratorium) Bill, 2017 placing an indefinite moratorium on offshore oil development in Belize’s marine territory. Belizeans remained steadfast in their opposition to offshore oil since the issue was brought up in 2010. An attempt by the government to conduct seismic testing in October of 2016 was met with strong opposition, particularly by the community of Ambergris Caye and Caye Caulker.
Following the pressure from Belizeans, the government officially announced the legislation to ban offshore oil in August of 2017. Later in October of the same year, Prime Minister Dean Barrow introduced the legislation during the sitting of the House of Representatives, paving the way to enshrine the moratorium. Then just before the year came to a close, on December 8, 2017, the House of Representative passed the motion in a rare bipartisan support. A few days later on December 13, 2017, the Senate cleared the path for the moratorium to become law, which received the assent of Belize’s Governor General, Sir Colville Young.
The international community applauded this move by Belize indicating that the law represents a national consciousness of Belize’s dependence on its marine assets, especially via tourism and fisheries. It was also mentioned that the law is an important step towards removing the Belize Barrier Reef World Heritage Site from the in danger list.