On Monday, July 1st, nine adults were charged for drug trafficking and kept unlicensed ammunition in San Pedro Town, but they avoided going to jail after a minor pled guilty for the offense. The minor was later released, after meeting a $2,000 bail from the San Pedro Magistrate Court. 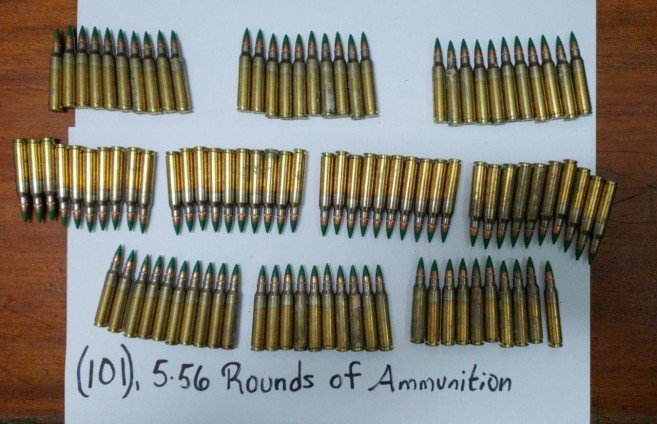 According to the police report, a joint operation was conducted at 5:30AM on Monday, July 1st at the residence of 44-year-old fisherman Alexander Fitzgibbon Sr. and 29-year-old fisherman Lucio Salazar in the Boca del Rio Area. The search ended with the discovery of 294 grams of Crack Cocaine, 89 grams of powdered Cocaine, 101 5.56 live rounds and 54 grams of Cannabis. Present at the time of the search was 27-year-old Karla Salazar, 19-year-old Antonio Ortiz, 19-year-old Brian Ack, 48-year-old Selfa Salazar, 18-year-old Wilmer Ortiz, 20-year-old Jeffrey Alegria, and 25-year-old Karen Santos. They were taken to the San Pedro Police Station and then arraigned at the Magistrate Court. Information given to The San Pedro Sun is that one minor pled guilty for the offenses. However, everyone was charged for drug trafficking and kept unlicensed ammunition. They are scheduled to return to court on October 31, 2019.

The fact that a large amount of ammunition was found by police and once person pled guilty, it gives way to the question if the Magistrate was right to offer bail. According to the Firearms Act, under the ‘General Offences and Penalties’ section: any person who is guilty of an offence against this Act shall, unless otherwise specially provided, be liable on summary conviction to a fine not exceeding five thousand dollars or to imprisonment for any term not exceeding two years, or to both such fine and term of imprisonment.
Provided further that the court may, in the case of a first offence under this Act, refrain from imposing the mandatory custodial sentence prescribed above if there be special extenuating circumstances which shall be recorded in writing, and in lieu thereof, impose a fine of not less than one thousand dollars and in default of payment of such fine, a term of imprisonment of not less than six months.
Police did not confirm if the minor who pled guilty is a first time offender. Additionally, The San Pedro Sun was informed that in all cases, is the Magistrate’s decision to offer bail.