« Older: Unannounced swearing-in of new Justices of the Peace surprises the President of San Pedro JP Association
Newer: » Letter to the Editor: My vote counts, so does yours 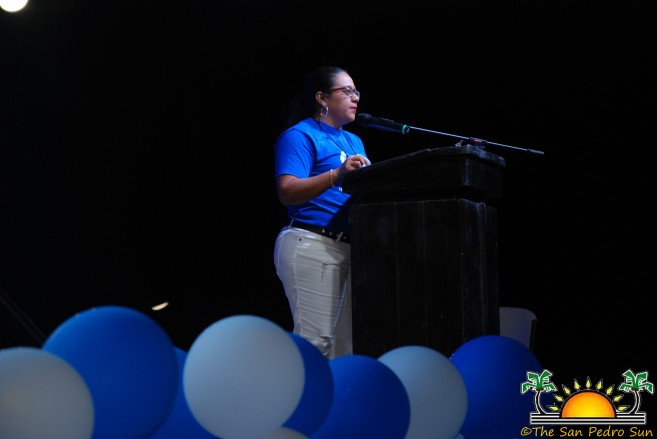 Supporters of the People’s United Party (PUP) San Pedro Town Council Slate gathered at the Honorable Louis Sylvestre Sporting Complex to witness their last pre-election rally on Friday, March 2nd. In a short ceremony, the seven candidates aspiring to form the next town council spoke to the attendees about their plans to make San Pedro a better place for all. They touched on areas like infrastructure, education, sports, health and the partnerships with the business community for the execution of projects and creation of jobs.

Mistress of Ceremonies Natalie Arceo welcomed the multitude reminding them that it is time for a change, to demand more and to give the seven PUP candidates the opportunity to run the affairs of the town.

There were loud cheers and applauds when the first Councilor candidate, Marina Kay, stepped to the podium to address the supporters. Kay told the audience to believe in Belize and San Pedro as change is coming. “As an educator, my focus today, tomorrow and forever will always be education,” said Kay. “The United Nations Convention of the right of a child says that all children have the right to education regardless of their social status. Yet over 150 children are out of the school either because there is no space, or they cannot afford it.” She indicated this is a violation of the right to education in Belize. Kay questioned how this situation is possible when according to her, San Pedro Town provides 38% of the country’s revenue. “The PUP 7 cares about education,” she continued. “We pledge to work with all existing schools, to build new classrooms on the island and help the schools with their teaching programs as well,” Kay mentioned that schools will benefit from tutoring programs, literacy, and arts. According to her, they plan is to also start a scholarship program up to the university level with the participation of the business community. At the same time, she spoke about lobbying for a trade school with the private sector and a primary and second high school from Central Government.

Next on the microphone was Councilor candidate Ian Pou who emphasized on sports. He believes that the youth on the island deserve positive sporting outlets for their development. “When elected the PUP 7 will work with the business community and stakeholders to provide our youth with a state of the art basketball court, volleyball court, indoor courts and beach courts,” said Pou. “Sports tournaments will be done all year-long, and it will include the communities on the island, from DFC to San Mateo,” Pou added there will be the implementation of adequate committees for a fair game. Another sporting facility that Pou will seek to introduce if elected, is water games as he believes that water-sport activities will create awareness to protect the island’s surrounding waters.

As the rally continued Arceo welcomed to the podium Councilor candidate Undina Graniel. The essence of her speech spoke about health and the services at the Dr. Otto Rodriguez San Pedro Polyclinic II. Graniel informed the audience that the Clinic was funded by a former PUP Government in collaboration with the island’s private sector and the Lions Club. “It is important that the medical services at our Polyclinic are of better quality,” she said. “We need more nurses, doctors, better equipment along with a laboratory manned by well-trained personnel. According to her, the idea is to also have better-trained health employees that can assist in the case of emergency. Graniel also pledged to work with non-governmental organizations and the private sector to create awareness on diseases like diabetes and cancer.

Addressing the crowd with the potential solutions to the many issues on the island was Councilor candidate Ruben Navidad. “San Pedro’s situation is very sad,” said Navidad. “A good leader takes an issue and turns it into an opportunity. The streets are an opportunity to pave nine miles, alleviate the traffic chaos and create jobs. The other issue is garbage, which is an opportunity to improve our health, help the environment and beautify our community and once again create more jobs.” Navidad spoke about the empty hotels and restaurants that can be used to bring more tourism to the island and once again the creation of more jobs. Navidad encouraged everyone to be their children’s heroes and to believe that with their vote they can create a better future. “We should not just aspire to live better, but to make a difference,” Navidad said.

Next Councilor candidate was Johnnia Duarte, who encouraged her supporters that it is time to unite and take back the island. Duarte indicated that with the dire situation in San Pedro due to the bad management of the current administration is affecting the youth.  “Is time to listen to their concerns, is time to create activities for them so they can be involved in the decisions within our community,” stressed Duarte. “Our youth are in dire need of a trade school and this PUP 7 will deliver a trade school.” Duarte indicated that there is another group of people in the community that have been forgotten. She spoke about the single mothers. “The women that have to go out and make the money and then come home and be the father and mother for their children. Where do they go for help with jobs? We must help these women, so they can provide for their children and be able to raise them into productive citizens,” said Duarte.

The last Councilor candidate to speak was Dianeli Aranda. She touched on the issue of crime that has been affecting the island. Aranda denounced the little local authorities are doing to curve criminal activities, attributing this to the corruption plaguing the local leaders. “I care about our children, I care about our families and most importantly, I care about safety,” said Aranda. “Over the years we have seen the rise in crime and not a single thing has changed. Not a single neighborhood watch has been placed in the crime infested areas, not a single community meeting has been held, not a single statement has been made by our leaders, the silence is deafening.”  The creation of more neighborhood watches, community patrolling and looking after each other on the island is one of Aranda’s ideas to guarantee safety in the different subdivisions in San Pedro Town. Aranda invited their supporters to not be afraid of change but be a part of the change. 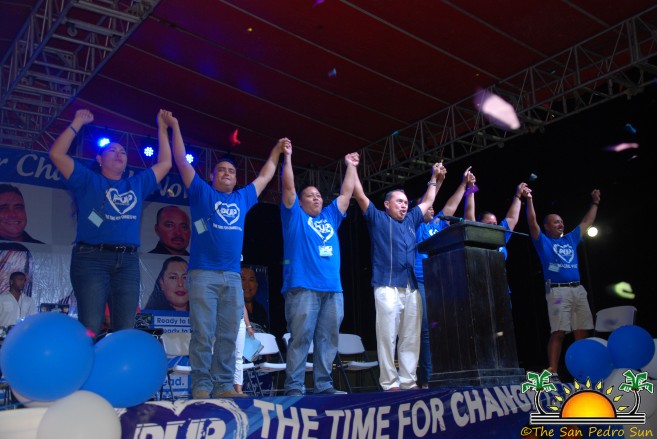 With the speeches of the Councilor candidates being delivered, the man of the hour, Mayoral candidate Andre Perez was then introduced. The crowd roared with loud cheers as Perez began addressing the audience. Perez reflected in time when the later and former PUP Mayor Alberto ‘Beto’ Nuñez left to the United Democratic Party (UDP) Town Council administration a robust town board with an account well over half a million dollars in the bank and a formidable fleet of machinery. He added that Nuñez also left behind a complete financial report showing income and expenditures in detail, which according to Perez was published and widely circulated. “That was back in 2003, back then if someone even with a prophetic voice would have foretold San Pedro Ambergris Caye that that was going to the last financial report for the next 15 years, no one would have believed it,” said Perez. “Fast-forward, with the UDP maintaining their firm grip on corruption, fear, and victimization over our island, with our streets in disrepair, serious striking crime and garbage laying all over the island it seems that we are bordering near and nearer to lawlessness and disorder,” Perez stated that 15 years after better has not come and that the island’s situation is worse.  He said that after the new PUP has repositioned itself with new fresh blood and people that are holding on to true principles of the Late George Cadle Price. “This new generation of PUP will not be held down by the past, but instead be motivated and fueled by the conviction that we can and deserve to be living in a better country,” said Perez. “There is a better way and our team promise to you that we, the PUP 7 will put a stop to the bleeding of our anemic community. Streets, trash, traffic, crime and a council in financial chaos is what we the PUP will be ready to tackle after the elections.”  Perez thanked everyone for their support and remembered that throughout the past six months of the campaign, they have visited the many families on the island and have laughed and cried with them, but most importantly listened to their concerns. Perez is convinced that based on the feedback from many island residents they are clearly sending a message that they want a change and that the only viable solution they see for a better tomorrow is with the PUP. Perez ended by calling on everyone to join them in the battle to seize that victory and free the town of San Pedro.

With lots of eats and drinks, live performances and music, the rally went on past midnight.

The 2018 Municipal Elections are scheduled for this Wednesday, March 7th at the San Pedro High School commencing at 7AM when the gates to the voting station will be open. Only registered voters in the municipality of San Pedro Town will be allowed to cast their vote. Furthermore, all those exercising their right to vote are required to present a picture identification Voter ID, Social Security Card or Passport) before entering their assigned voting station.