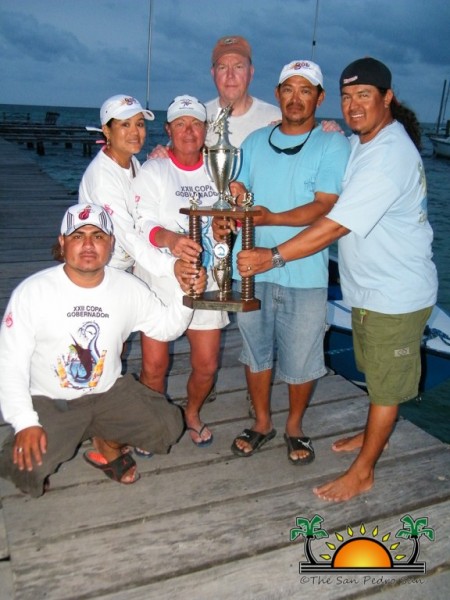 A group of fishermen set a new record at the annual Governor’s Fishing Tournament in state of Quintana Roo, Mexico held on May 4th and 5th. The 22nd annual fishing tournament called “Copa Gobernador” is the largest fishing tournament in the state of Quintana Roo and takes place in the tourism community of Mahahual. Four teams from San Pedro Town participated and for the first time, a Belizean team captured the first place. The team consisting of Captain Enrique “Ricky” Marín, Josué Reyes, Kevin Kelly, Alby Godoy, and Kim Kelly also set a new record after catching a blue marlin weighing 314.5 pounds on the first day of the tournament.

Team Hook Line+Sinker managed to secured 9435 points far ahead of the other fishing teams. Three other teams from San Pedro Town also participated in the intense competition. The Cuarto Poder Newspaper is reporting that one of the Belize team’s catch was disqualified, causing “controversy” and gaining major attention in the state’s press.

“What caused controversy was when the organizers and judges, headed by Leonides Baeza, President of the Chetumal Club Fishing decided to disqualify a blue marlin weighing 104 pounds after it was already accepted as good, claiming that it was maimed. By allowing the fish, it would have given ‘Lady Leslie’ (the other Belize Team) second place. Having allowed the fish for weigh in automatically meant that the catch was valid. But in an unexpected turn, a later decision was made to disqualify the fish, favoring relatives and friends of the organizers,” reports The Cuarto Poder.

According to The Cuarto Poder, other fishing teams protested the decision indicating that even though the 104 pound blue marlin had a deep wound, it couldn’t be classified as “mutilated/maimed” since it was intact. Lady Leslie’s team was headed by Jody Leslie and included Ricardo Marin Jr, Briana Leslie and Martin Leslie Sr. “Despite years of striving to attract Belizean fishing teams to participate in fishing tournaments in Mahahual, events like this [can] kill these promotions,” protested a team when interviewed by The Cuarto Poder. Captain Jody Leslie also expressed disappointment with the organizers of the Copa Gobernador, especially given the effort invested in participating in such tournaments. He told The San Pedro Sun that he is personally reconsidering future participation in Mexican fishing tournaments.

At the end of the tournament, Hook Line+Sinker proudly claimed first prize, after capturing the largest fish ever in the Copa Gobernador tournament setting a new record in any official tournament in that state. It is also the first time that a Belize team has won Copa Gobernador Fishing Tournament.

Enrique Marin spoke to The San Pedro Sun, saying that winning the event is something good for Belize. “It means a lot because this is the first time we have competed in such a tournament. There have been other boats from Ambergris Caye that have competed in the past six or seven years. I think it is an important win for a Belizean team. This will certainly boost their morale for future tournaments in Mexico,” said Marin. According to the San Pedro Town-based fishing guide, the blue marlin caught in the tournament is one of the biggest fish he has ever caught. “It is certainly one of the biggest fish I have caught so far. I normally do catch and release fishing, so it’s a bit harder to tell the size. This fish was actually weighed in, so it gives a more accurate measurement… It was not really a big challenge to reel in the fish. We fought with the fish for about 50 minutes before it was in the boat,” explained Marin. The team made the only major catch at about 12:30 PM on Saturday some 20 miles north of Mahahual. The proud Belizean team won a fully loaded four-passenger pickup truck, a prize given by the Governor of the State of Quintana Roo, Roberto Borge Angulo amongst other prizes. They also got an automatic entrance to the national fishing tournament in Cancun to be held later this year. 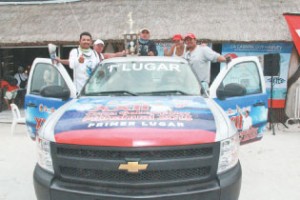 The second place went to the fishing vessel, namely “Caprice”, captained by Santiago Baeza Valley that brought in a blue marlin weighing 89 pounds, 20 pounds less than the fish that was disqualified on Sunday. Second place won another car amongst other prizes. The third place went to fishing vessel “See You Well”, headed by the Secretary of State for Economic Development of Quintana Roo, Javier Díaz Carvajal. He who won an ATV.


All four teams from San Pedro Town were in the top 15 teams. Sulema captained by Armado Gonzalez and Hilly Boo Lara won sixth place and brought home a motor cycle. Alberto Bradley’s team onboard Bill Collector won ninth and they each got a Nextel Iron Rock Smart phone while Jody Leslie’s Lady Leslie came in thirteenth and won $5000 pesos worth of fuel. A total of 69 boats participated in this year’s tournament.