« Older: The Battle is on for the semi-finals at the Mayor’s Cup Tournament
Newer: » Mayor’s Cup heads to the finals

As of early in the morning, the fishermen set sail in search of the largest Wahoo. On the first day of the tournament, 13 of the 28 teams landed fish, most of which were barracuda, and five landed Wahoo, including the Belizean teams. The Belizean teams took advantage of their skills to maneuver in choppy seas and managed to take the lead in the first day of the tournament, pulling far ahead of the Mexican teams.

With three of the Belizean teams ahead of the other Mexican team on the first day, the local fishermen from Quintana Roo were forced to show their knowledge of the sea on the second day. But Reel Challenge, with the Marins on board, pulled off the upset against the Mexicans when they landed an impressive catch on the second day, which complemented their big catch on the first day.

Clearly ahead of the rest of the team was the Reel Challenge captained by Enrique Marin with a score of 1849 point. They captured first place and brought home the top prize, which included a trophy and a Silverado pickup truck. Second place went to Sea Star of Chetumal, Mexico. Captained by Miguel Marzuca, Sea Star got 1589 points and won$ 50,000 pesos in cash. Eight points behind in third place was the Belizean team Fortuna, headed by Victor Lara, who captured 1581 points. Lara and his team won a Honda motorcycle. Coming in fourth was Mexican team All In captained by Caesar Corners who captured 708.60 pointed and won a Honda motorcycle, while rounding off the top five with 707.60 points was fishing team Lucy Devil headed by Belizean Tony Lara, who won $12,000 pesos in cash. 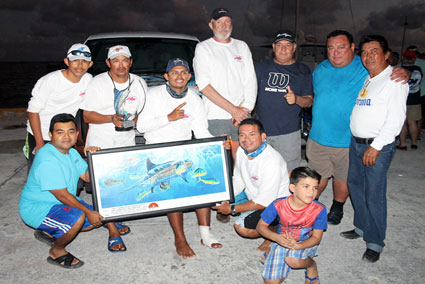 At 53.68 pounds, the largest Wahoo caught by Reel Challenge on the first day of the competition almost topped the state record which currently stands at 54.96 pounds. That record is held by Sosa Centeno in the Professor Augusto de Playa Del Carmen Tournament.

This is the second time that the Marins have won a fishing tournament in Mahahual, Mexico. In May of 2013, the Reel Deal Team headed by Enrique Marin, won the 22nd Annual Copa Gobernador Tournament, setting a state record after catching a Blue Marlin weighing 314.5 pounds.

The San Pedro Sun joins the community and country in congratulating the Reel Challenge and their team members including Enrique Marin, Josh Marin, Ricky Marin and Joe Hempel for winning the Wahoo de Plata Tournament.