Killing of a Bottlenose Dolphin in Northern Belize


The Ministry of Blue Economy & Civil Aviation and the Belize Fisheries Department are saddened and express extreme displeasure with the killing of a Bottlenose dolphin in Northern Belize in the vicinity of Progresso and Little Belize Lagoon. 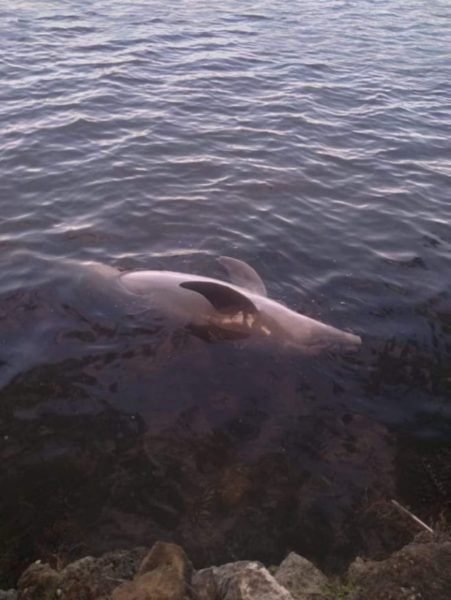 The incident has prompted the Belize Fisheries Department to remind the general public of the protected status of Bottlenose dolphins. Acting Fisheries Administrator Mr. Rigoberto Quintana noted, “Bottlenose dolphins are highly intelligent and social marine mammals. We denounce the senseless killing of the animal and lament the loss of this valuable animal as its species is a contributor to Belize’s biodiversity and has high ecological importance.”
The incident reportedly occurred around the 17th of July 2021 and was confirmed by the Sarteneja Alliance for Conservation and Development (SACD) research and monitoring team that swiftly responded to reports of a dead Dolphin apparently shot in the Progresso/Little Belize Lagoon. The SACD team was assisted by members of the Little Belize community. Reports are that a private property caretaker in the area had secured the Dolphin found floating on the lagoon. The snout was found already partially deteriorated with what appeared to be evidence of a crocodile having already commenced feeding on the carcass.
The SACD team that responded conducted an on-site necropsy and confirmed that the cause of death was due to a shotgun wound found approximately 20 cm below the dorsal fin. Six pellets were recovered during the necropsy from nine holes left by presumably a 12 gauge 00 (“double-ought”) buck shell shotgun.
Dolphins are protected under the Fisheries Resources Act No. 7 of 2020. The Belize Fisheries Department reminds the public that anyone found to have killed or to have in their possession a marine mammal commits an offence punishable by a fine and/or imprisonment. The Department advises the public to report any incidents involving any marine mammal by calling telephone number 224-4552 or by emailing [email protected]