The San Pedro Traffic Department has impounded several golf carts brought to the island without the required permits. The golf carts have been taken to a holding area managed by the San Pedro Town Council (SPTC). There is the possibility that illegal vehicles could be removed from the island. 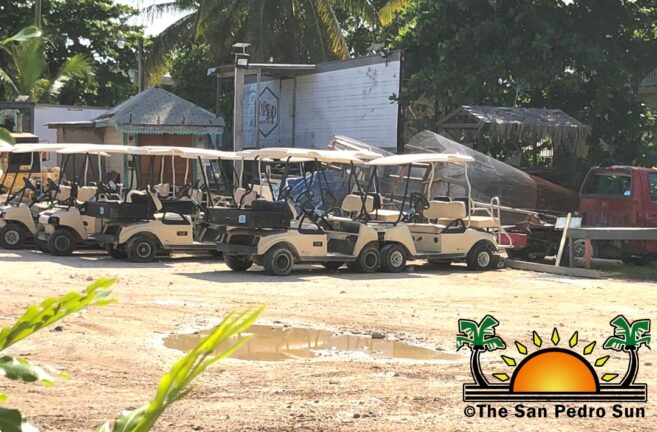 Mayor Gualberto ‘Wally’ Nuñez said raids had been made throughout the island, particularly in rentals. Some of these rental companies were found with golf carts without permits. The Mayor said that they were immediately impounded and a fine of $100 per cart would be issued. According to him, this fine should be at least $1,000 per golf cart to deter other companies or persons from trying to import vehicles to the island without the proper documentation.
Nuñez said that the Chief Transport Officer in the Ministry of Transport told the Chairman of the San Pedro Transport Committee that not only should the fines be paid, but the vehicles need to be removed from the island. The owners can then apply for the proper permits to transport them back to San Pedro.
Another issue the Mayor pointed out is that some golf cart companies are importing golf carts to sell. There are only a handful of dealers licensed to sell vehicles on the island; thus, they are breaking the law. “One of the issues we notice is that they sell a golf cart from their rental, and then they apply for a replacement,” said Nuñez. “So, what the board wants to do is not allow a golf cart rental to have any replacements until after three years.” This is to avoid the selling of vehicles without proper authorization.
Some impounded golf carts released
There was word that some impounded golf carts were released after the Mayor’s intervention. Mayor Nuñez confirmed that some coaches were released. According to him, these were carts from a recent raid. The vehicles were confiscated after the owner could not produce the documents during the operation. However, a day after, the owner was able to provide the transport authorities with the paperwork with the respective permits for releasing the vehicles.
The SPTC and the local transport department appeal to residents to abide by the regulations set by the island authorities. These regulations monitor the number of vehicles in San Pedro and avoid the saturation of golf carts on the streets. Anyone planning to acquire a vehicle/golf cart should apply at the SPTC transport offices first and obtain a permit before purchasing a vehicle.

The Importance of blood drives