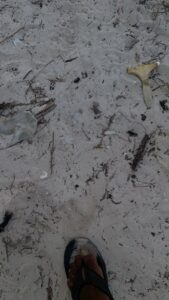 Over the past weeks, more sea turtle nests have been spotted on the beaches of northern Ambergris Caye. The nesting season, which lasts through November, primarily covers an area from Punta Azul to Robles Beach and the Rocky Point area. Every year a crew from the Hol Chan Marine Reserve monitors and records the nesting period and the challenges affecting the season. This includes human activity such as increased and careless vehicular traffic and improper disposal of garbage. Recently, residents have discovered destroyed turtle nests and eggs on the beach.

According to residents near these remote beaches, reckless motorists are to blame. Certain spots along places like Robles and Rocky Point have signage to advise anyone driving on the beach to do so responsibly because of the active sea turtle nesting season. However, this appears not to be working and has affected some nests. Some complaints from persons witnessing the damage to nests are that people seemed to remove the signage, making it difficult for others to know where a nest may be. 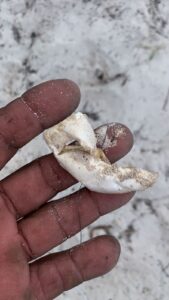 These issues endanger the successful hatching of these nests, and the public is urged to be mindful when traveling north to look out for any nest signs and avoid running over them. The folks at Hol Chan have explained that driving over the nest compacts the sand, making the hatchlings unable to emerge from the nest once hatched. Unfortunately, all hatchlings can then die.

While the Hol Chan staff monitors the nesting beach, concerned islanders believe there should be increased monitoring and patrolling by rangers. Nearby is the Bacalar Chico National Park and Marine Reserve, a World Heritage Site. Enforcement could come from rangers working at this site, but residents continue to report the poor presence of authorities around the sea turtle nesting. Underfunding for protection is to blame. 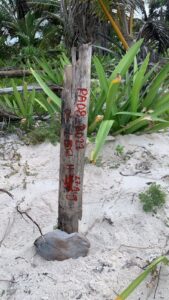 According to islanders north of Ambergris Caye, the said national park continues to be afflicted by illegal activities such as hunting and fishing with little intervention by the respective authorities. They hope the local authorities on the island or Central Government can take these matters seriously.

Sea turtles and their nests are protected by law in Belize, and no one should have these creatures or tamper with nests. The species common on Ambergris Caye are the Loggerhead and Green turtles. The Hawksbill turtle is another visitor but does not nest on the island beaches all the time. It is rare to find a Hawksbill nest.

While the season continues, the staff at Hol Chan will continue doing their best to ensure sea turtle nests thrive. Anyone spotting an unmarked nest or seeing a turtle on the beach, please report such sighting to the Hol Chan office by calling telephone number 226-2247 or messaging their Facebook page

The public is reminded not to disturb a turtle nest, and if they spot an unmarked nest or see a turtle crawling in the area, please report the sighting to the Hol Chan office by calling 226-2247 or messaging Facebook https://www.facebook.com/holchanbelize. You can also reach out to them via WhatsApp at 614-6439.