The Belize Forest Department (BFD) and American Crocodile Educational Sanctuary (ACES) joined efforts on Wednesday September 18th at the Fido’s Courtyard conference room as they collaborated on a presentation that would educate the San Pedro police force on the fundamentals of handling crocodiles.

Over the years, BFD has relied on ACES for assistance incapturing and re- locating problematic crocodiles countrywide. Now that ACES is on Ambergris Caye, the organization is joining efforts to have the police force trained in capturing crocodiles, which is quite a frequent occurrence on the island. Mrs. Rasheda Garcia who presented on behalf of the BFD, gave the officers present a briefing on what the BFD covers.Such coverage includes: mangrove clearance, the overseeing of protected areas, the issuing of license and permits for hunters and dealers and the handling of human/wildlife conflicts. Garcia expressed the hopes of establishing and developing a relationship between the BFD and the Police Department. Accompanying Mrs. Garcia were fellow BFD officers, Daniel Chi and Victoria Cawich.

Following Garcia’s presentation Cherie Chenot- Rose of ACES gave an oversight of the decreasing crocodile population on Ambergris Caye, and just how the different aspects of human interaction have contributed to this decline. According to Rose, the population of American crocodiles on Ambergris Caye has declined from a record 5,000 in 2005 to a current estimated 1,000. Rose shared the activities imposing threats upon the declining population, the most major being poaching and feeding crocodiles. The American crocodile is a protected species but is illegally poached for meat , teeth, skulls, skin and for torture. Feeding crocodiles has also desensitized the species from its natural instinct to stay away from man. However crocodiles are very territorial and feeding them gives them grounds over a new territory in which they won’t hesitate to attack and defend if they associate humans with food. 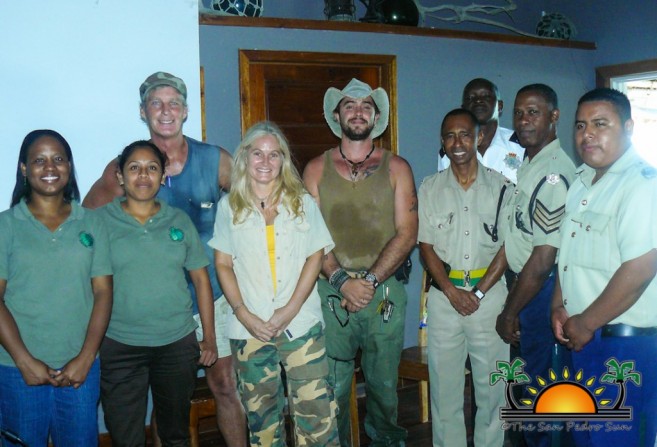 Although attacks on humans are not common on the island of Ambergris, ACES fears this status may change. Because of the feeding (directly or indirectly due to improper disposal of garbage which attracts their prey such as raccoons and rats), crocodiles have been drawing nearer and nearer to land, with reports of several attacks on stray and pet dogs. All in all, the police received a well- rounded view on how to act within jurisdiction of the law when called upon to aid in the capturing of the problematic reptiles.


Later that evening, the officers led by Officer in Command Luis Castellanos, accompanied by the BFD officers had a chance to get some hands-on experience in handling crocs with the ACES team. The crews of police and forest officers were escorted to the ACES crocodile holding facility in San Mateo. At the facility ACES croc wrangler and animal behaviorist Vince Rose along with the ACES team demonstrated essential techniques in handling these aggressive reptiles. The officers got a chance to practice those techniques and were later carried on an eye-shine expedition via boat on the lagoon to learn how to spot crocodiles in their natural environment.

While this training has just been initiated, The Belize Forest Department along with ACES hope to equip the police department with enough information and training to carry out these practices when called upon for assistance by the general public.