The Government of Belize is seeking the public’s assistance in identifying the culprits responsible for the death of two young jaguars in less than a month. The first incident was reported on December 26th, when a young jaguar was observed floating in a canal in Belize City. The second one was reported on January 10th when a decapitated jaguar was found floating on the Belize River. This has prompted the Government, via the Ministry of Agriculture, Fisheries, Forestry, the Environment, Sustainable Development, and Immigration, to issue a reward of $10,000 for information leading to the arrest of the poachers. Jaguars in Belize are one of the many wildlife species protected by the law and hunting the wildcat is prohibited. On Ambergris Caye, environmentalists were shocked when the news broke out. However, they are also disappointed at the level of motivation when it comes to other protected wildlife, such as the illegal poaching and mutilation of American crocodiles on the island, which has been largely ignored by the governmental authorities. 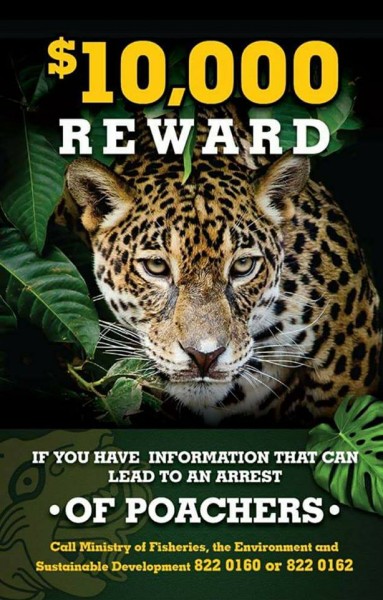 These poaching incidents have been attributed to the demands of the black market. Jewellery is often made from the parts of jaguars and crocodiles, especially their teeth, which are then used on necklaces. According to reports from eyewitnesses, the jaguar found in Belize City seemed to have its teeth missing. The other carcass near the Belize River was missing its head, most likely for its teeth or possibly as a trophy.
The Government, through its Forest Department, has informed the public that since the second reported jaguar, an investigation has been launched. They state that in their attempts to deter such atrocities, they have held operations in various parts of the country, including Placencia, where jewelry made from jaguar teeth was confiscated. No details were offered if anyone was apprehended or fined. However, they released calls on citizens to report wildlife crimes to the Forest Department, stating that such crimes will be investigated and prosecuted to the fullest extent of the law.
On Ambergris Caye, Chris Summers from the American Crocodile Education Sanctuary (ACES), is dubious about the commitment of the Department. According to him, one week before Christmas, he made a report to the Forestry Department about the beheading of a crocodile on Ambergris Caye. He stated that personnel at that Department took his message and said they were going to look into the matter. Up to press time, Summers says he has not heard back, even though he has repeatedly reminded them of the serious situation on the island. In fact, no actions have been taken to deter the illegal poaching of crocodiles on the island. In the past ACES, have aided in the relocation of crocodiles from vulnerable areas, but in the process, they have witnessed cruelty towards the creatures.
One such incident was in March of 2017 when crocodiles were discovered with their snouts intentionally bound with tape and wires. The creatures were assisted by ACES personnel and were saved from a sure death. The recent incident in which a beheaded crocodile was found in the San Mateo subdivision is clear to not just Summers, but to other concerned residents on the island, that these actions are a part of a poaching trend that uses the animal parts for commercial purposes. Summers explained that just as jaguars are essential to the balance of the ecosystems, so are crocodiles. The non-profit organization believes that the level of protection for all protected species in the country should be equal, as all species fall under the same ‘endangered’ umbrella. ACES continues its work in preserving Belize’s critical wetland habitats and protected species, especially crocodiles. 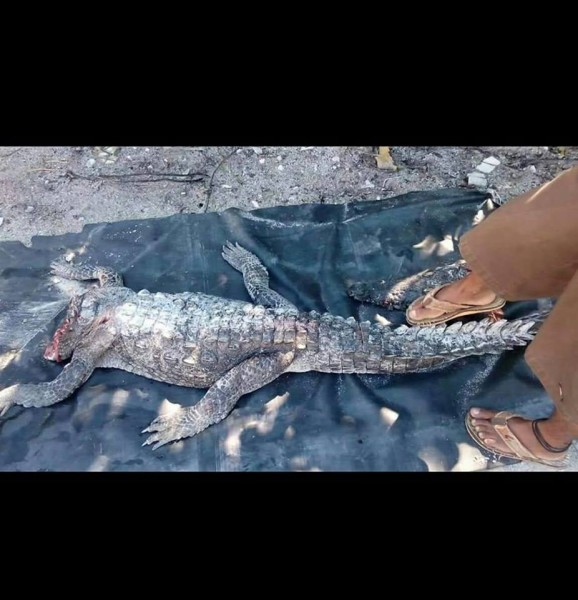 Some island residents following the wildlife issues believe that the reason why the jaguars have garnered so much attention is that the Government values this species tremendously. The Government of Belize boasts that the country has the only jaguar preserve in the world, and proclaims itself as a world leader in the conservation of these wild cats. As such, the fate of the endangered crocodiles on the island and other parts of the country is largely overlooked. These same residents believe that due to the long-standing misconception that crocodiles pose a major threat to humans, their preservation is not prioritized.
The San Pedro Sun contacted the Forest Department, which indicated that each species of wildlife in the country is different from the other, and thus, the management may differ, but it is necessary that their survival is ensured for the future. According to Shanelly Carillo from the Forest Department, the Ministry saw the need to bring this issue to light due to the possible reasons for the killings. “The killing of wildlife can be due to conflict. We need to understand that wildlife is important, but so is the well-being, livelihood, and safety of persons in Belize,” said Carillo. “There is sometimes the need to remove wildlife from some areas before they become a bigger threat. However, with the case of the two jaguars in the past weeks, it is believed that the motive for the killings was for the acquisition of the body parts.” She refrained from commenting directly about the crocodile incidents on the island and took a general perspective by stating that the Forest Department takes these illegal killings of wildlife seriously. She mentioned that the Department has undertaken several measures to make sure that people caught committing wildlife crimes are prosecuted so that people realize how this will affect the country in the future. “However, the Forest Department does face limitations when it comes to resources and as such, we rely on the Belizean community at large to help us stop these crimes,” Carillo noted. The governmental organization informed that some of the measures considered are to increase the current $10,000 fine and the 12-months of imprisonment for these atrocious acts. 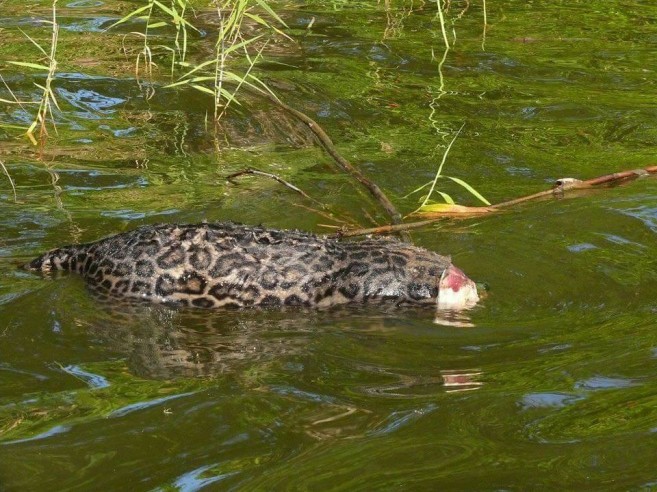 In addition, visitors across the various tourist destinations across the country are asked to avoid purchasing souvenir products made from animal parts. The Department is investigating additional reports of places around Belize that continue to sell jewelry made of crocodile, jaguar and even manatee parts. It is believed that if there is no market for these products, poachers could possibly be discouraged from continuing this practice. 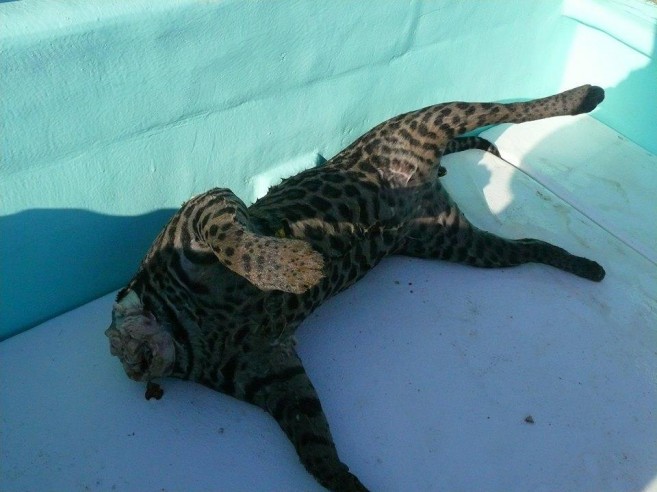 The Department briefly mentioned as well that under their supervision, a Wildlife Program is working towards the sustainable management of Belize’s wildlife. It is known that in several Latin American countries, the high number of wildlife being illegally killed for their body parts is drastically increasing. The black market for wildlife parts is negatively affecting those countries, thus, the Department is urging Belizeans to join them in dealing with the issue from the root before it is too late. They take the opportunity to remind everyone that wildlife plays a very vital role in Belize- important in the promotion of ecotourism and that many persons depend on wildlife as a food source. 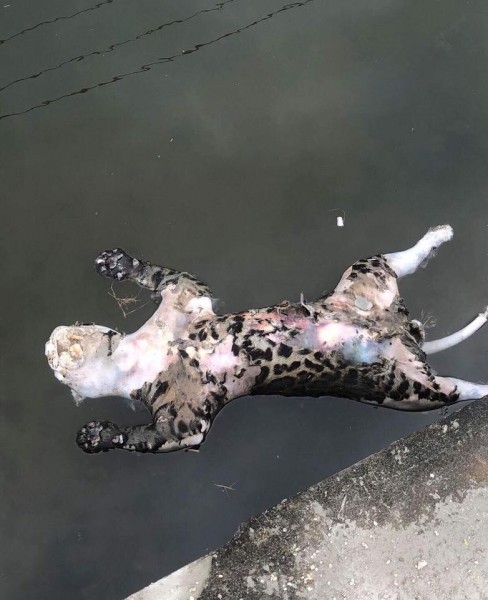 Under the Wildlife Protection Act, there is a schedule which lists the protected wildlife in Belize. Some of the species under the schedule include the five species of wild cats (which includes the jaguar), two species of crocodiles (Morelet’s crocodile and American crocodile), howler monkeys, spider monkeys and tapir.