The recent escalation of crime on Ambergris Caye has prompted the head of the Belize Police Department (ComPol Chester Williams) to dispatch additional personnel to ensure the security of island residents and tourists alike. After the recent double murder of a well-known tour guide and tourist, the San Pedro Chapter of the Belize Tourism Industry Association (SP BTIA) along with the Belize Hotel Association are urging the Government of Belize via its Ministry of National Security to increase the size, effectiveness and professionalism of policing in all major tourism destinations countrywide. The organizations are also asking for the eradication of the international drug trade that triggers Belize’s crime issues by applying a permanent campaign to attack corruption at all levels in government. They also appeal for an improved system of justice at the police, Director of Public Prosecutions and courts levels and propose a media campaign to encourage citizens to partner with law enforcement to combat criminal behavior across the country. 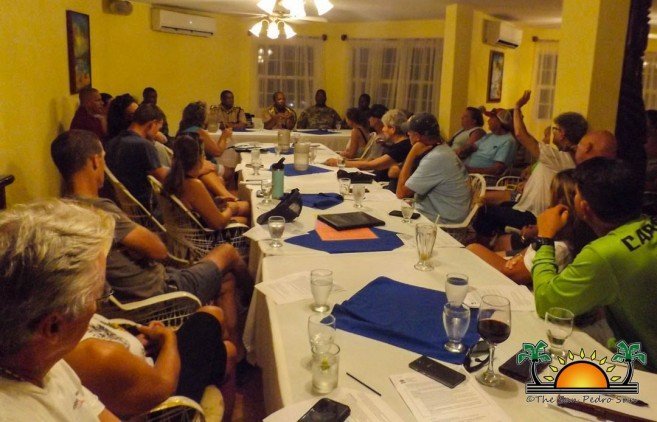 In a press release issued by the National Security Council on Friday, June 28th, several measures were announced. These include additional law enforcement equipment, new permanent checkpoints, police cameras at hot spots, and the re-opening of the Tres Cocos police booth. While the Belize Coast Guard (BCG) is expected to further ensure security at sea and in the lagoon area of Ambergris Caye, a special task force will be formed. According to the release, this task force will be comprised of members of the San Pedro Police Formation and the SP BTIA. The force will have the task to monitor law enforcement performance and crime reduction on the island.

Commissioner of Police (ComPol) Chester Williams met with the SP BTIA on Tuesday, July 2nd at El Divino Restaurant south of San Pedro Town, and informed the group of the increase in tourism police, a permanent checkpoint north of San Pedro, community policing and an increase in patrols in an attempt to reduce violence on the island. ComPol Williams has been paying frequent visits to the Ambergris Caye following the June 23rd murder of local tour guide Mario Graniel and American tourist Dr. Gary Swank. This unfortunate incident has made local and international headlines, putting a dent in Belize’s top revenue: the tourism industry. The increase of security personnel on the island is aimed to bring back the trust of residents and potential visitors who make the island their vacation destination. 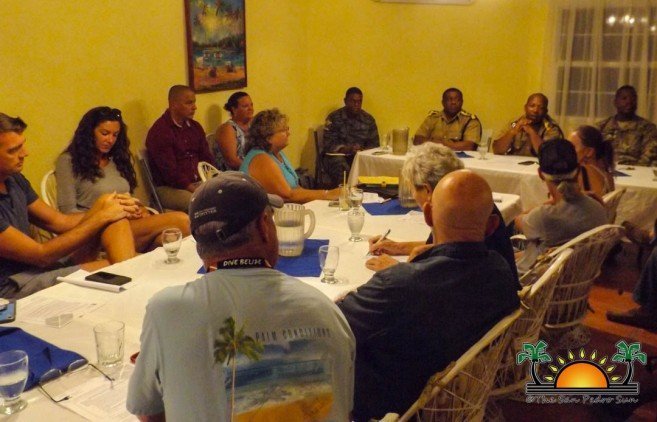 Over the past week members of the SP BTIA have been assisting the police department with meals and accommodations for the investigators stationed on the island while local hoteliers have also provided lodging.
During the meeting, SP BTIA highlighted key issues that need to be addressed. Removing peddlers and hustlers from the beaches and streets who harass pedestrians and sell drugs, use K-9 units to detect drugs and weapons at marine points of entry, post uniformed officers at these points of entry, mandate manifests on all boat ferries, assign a permanent security team on the island, clean up the San Pedro Police Station and removing derelict vehicles from the front entrance, improve the customer service skills of police officers and require that they wear name badges when in uniform were just a few of the items discussed, with the question asked, “How can stakeholders work together and assist the police department?” 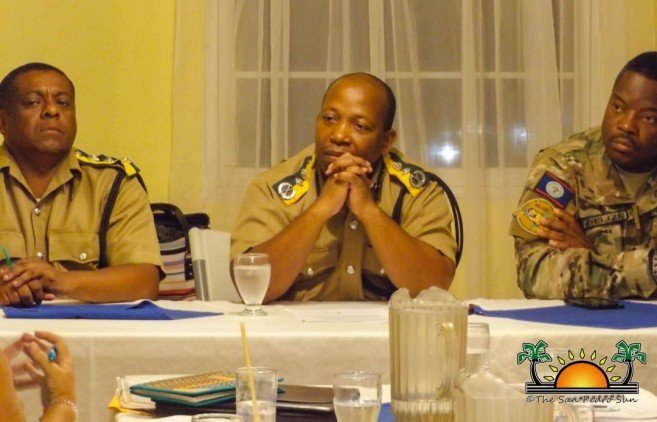 In addition to hiring additional Police Constables to support the Tourism Police, ComPol Williams asked for assistance with accommodations for the back-up personnel coming from the mainland, which will remain on the island for an extended period. He explained that in the past, the department would spend and exceed BZ$60,000 per week to keep extra officers on the island. Stakeholders discussed the possibility of helping the police with lodging costs. According to Williams, he has secured an apartmentcomplex that can house ten officers for BZ$1,200. per month. “We will take care of transportation, and food,” said ComPol Williams. “The proprietor of the apartment complex has offered the first three months free of cost.” Williams also stated that the SP BTIA could help by providing training in customer service to police officers on the island, as they believe it is needed, and agreed that a facelift of the police station was in order as well as wearing name tags.
Additionally, Williams reported that more weapons and golf carts would be purchased to assist the extra personnel assigned to San Pedro. A permanent anti-crime force will remain on the island, and for the upcoming months, the Gang Suppression Unit, Special Patrol Unit, and Anti-Drug Unit will be stationed in San Pedro to tackle the gang-related activities affecting tourism. 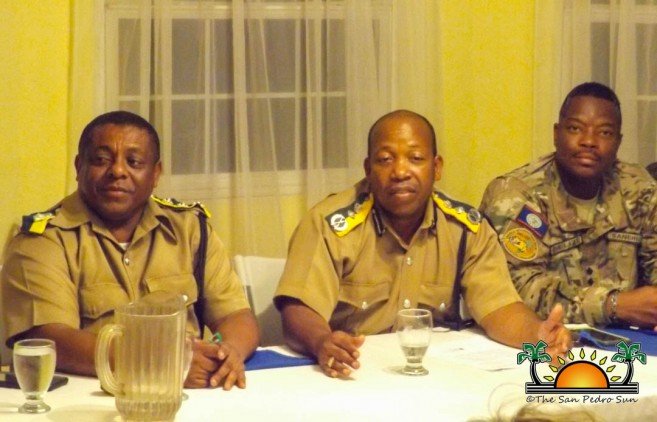 While operations will focus north of San Pedro via a permanent checkpoint at Tres Cocos, police will keep an eye on downtown and southern Ambergris Caye. There will be checkpoints at the main ports of entry, while the BGA will increase their patrols on the surrounding waters. Williams also announced that besides the golf carts and motorcycles that will be acquired to patrol north of the island, two motorcycles would be assigned for the southern part of the caye.
ComPol also addressed firearm-related cases. He stated that most of the times, the ammunition used in murders are from licensed gun owners. Despite not having an equipped forensic department they will start to gather the necessary specimens to identify who the expended ammunition belongs to.
At the end of the meeting, Williams thanked the San Pedro BTIA for hosting the meeting and committed to conducting more meetings with stakeholders whenever necessary. “I am here to work with everyone, I am approachable, and I want everyone on this island to feel safe, especially our visitors,” said Williams. The same sentiment was shared by San Pedro BTIA Chairwoman Tamara Sniffin, who deemed the gathering as a great opportunity to see how the community and the police can work together and address criminal issues on the island.
ComPol thanked the support of the island community and stated that his presence would be frequent to Ambergris Caye as he follows on the operations to dissuade any criminal activities.