« Older: Supt. Henry Jemmott is laid to rest in his hometown of Dangriga
Newer: » San Mateo shooting under investigation; victim in stable but critical condition


For a second time, Canadian national 32-year-old Jasmine Hartin was escorted by San Pedro Police after arraigned at the San Pedro Magistrate Court. This time it was not for the Manslaughter by Negligence charge she received on June 1st for the shooting death of Police Superintendent Henry Jemmott, but for Common Assault. She was granted a $1,000 bail plus one surety of the same but was yet a free woman. The same day Hartin was promptly taken to the Supreme Court in Belize City, where her $30,000 bail for the Manslaughter by Negligence charge was revoked. If she cannot secure another bail bond, she will remain at the Kolbe Foundation-Central Prison in Hattieville until tried.

Hartin enjoyed 16 days of freedom after she was released from the central prison on 9 June, when the Supreme Court granted her a $30,000 bail and one surety of the same amount for the Manslaughter by Negligence charge. Hartin relocated to San Ignacio Town in the Cayo District, leaving her 4-year-old twins in San Pedro Town with their father and her partner Andrew Ashcroft. However, on Tuesday, 22 June, she traveled to San Pedro and attempted to see her children and retrieve some personal items from her home at the Grand Colony complex located south of San Pedro Town. She was denied access, and a back-and-forth argument was documented with a cell phone video taken by Hartin. She later confronted Andrew and again videotaped the incident showing Andrew walking away from her while Hartin yells at him, demanding access to her children. “Why won’t you let me see the kids, Andrew? Why won’t you let me see the children? Why are you stopping me from being at my house?” she kept asking Andrew as he walked away, ignoring her.

Two days later, when Hartin reported to the San Ignacio police station as per her bail conditions, she was arrested for Common Assault. According to details of the charge, it is alleged that Hartin assaulted an employee at the Alaia Resort named Sandra Grisham. On Friday, 25 June, she was transported to San Pedro, where she appeared at the Magistrate Court. The San Pedro Sun was granted access to the court and was able to witness the hearing. Hartin was read two charges by Magistrate Christina Perera. The first one was for the Possession of a Controlled Drug (cocaine). The charge explained that 0.4 grams of cocaine were found inside Hartin’s purse on 28 May, shortly after the incident of Jemmott’s shooting death. Hartin pleaded not guilty to this charge.

The Magistrate then read the details of the Common Assault charge. This indicated that Hartin behaved improperly to security guards and other employees while creating a disturbance at the property (Marriott Alaia Hotel) next to Grand Colony, which is also Ashcroft property. Additionally, it was reported that Grisham tried to calm Hartin down, but instead, she attempted to push her.

Hartin pled Not Guilty of this charge and stated to have been unaware that she was not welcome at Grand Colony, where she lived. Hartin told the court that after Andrew failed to take her children to San Ignacio for a visit, he would not answer her calls, so she traveled to the island to find out what was happening. “I was surprised to find out that I could not access my property. I only went to get some personal belongings and to see my kids,” she said.

An almost emotional Hartin claimed that the children saw her and were screaming, ‘Mummy! Mummy!’ She agreed with the charge details that she attempted to push Grisham but that she did not follow through with the aggression. “I was very sad and confused,” she said. She believes that trying to get some belongings from what she says is her property and see her children was in no way a breach of her bail conditions. Hartin also revealed that she has no access to funds and has borrowed money from friends and reached out to her savings from Canada. 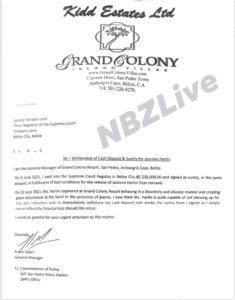 of her Supreme Court bail. Apparently, the management of Grand Colony were the ones who posted the $30,000 plus surety bail, and in a letter submitted to Justice Herbet Lord dated June 25th, stated, “On 20 June 2021, Ms. Hartin appeared at Grand Colony Resort behaving in a disorderly and abusive manner and creating a great disturbance at the hotel in the presence of guests. I now think Ms. Hartin is quite capable of not showing up to trial, and I, therefore, wish to immediately withdraw my cash deposit and revoke the surety I signed as I simply cannot afford the financial loss should this occur,” the letter was signed by Frank Habet, General Manager for Grand Colony.

Although the prosecution objected to bail, alleging that Hartin could return to Grand Colony and repeat the incident, bail was granted on the Common Assault charge. Later that day, Hartin was in Belize City, where the Supreme Court sited that her $30,000 bail on her Manslaughter by Negligence charge had been withdrawn. Because Hartin was unable to obtain that bail, she was again remanded to the central prison.

Her attorney, Richard ‘Dickie’ Bradley, believes his client was ambushed with the bail deposit withdrawal without sufficient notice. “That application was done today, this afternoon,” Bradley pointed out. “You can’t ambush people like that, Hartin is accused of the terrible crime of taking the life of one of our finest officers, but she is entitled to the protection of the court and the law.”  He is shocked at what is happening with this case and believes that better must be done. Bradley says that people should be given sufficient time when bail is revoked to find someone else to produce the money and surety. If not, the result is a guaranteed ticket to prison if the accused cannot secure the bail.

Up to press time, no confirmation of bail has been posted for Hartin.