« Older: Temporary ban on the importation of dogs into the US affects adoptions at Saga
Newer: » 9PM curfew goes into effect on July 26th 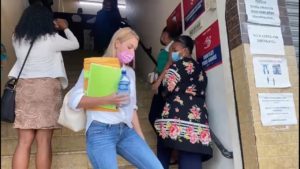 In an attempt to get custody of her twins, Jasmine Hartin took her former partner and father of her children, Andrew Ashcroft, to the Family Court in Belize City on Tuesday, July 20th, where things did not go well for her. The court granted Ashcroft interim custody of the two 4-year-old children, and the case was adjourned.

The former island resident, 32-year-old Canadian National, was disappointed with the court’s decision. She briefly said that it was an unfair outcome. Her attorney decided against discussing what took place inside the court because it is a matter involving children.

When Ashcroft emerged from the courtroom, the media questioned him, but he offered no comments. He boarded a vehicle waiting for him on the street and was whisked away.

Hartin, who was living a lavish life before May 28th, is accused of killing Police Superintendent Henry Jemmott and faces a charge for Manslaughter by Negligence. She is out on bail, living on the mainland, and appears at the San Pedro Magistrate Court on August 12th for her first hearing over Jemmott’s death.

The mother of Lord Michael Ashcroft’s grandchildren is now focusing on gaining access and custody of her children. She claims the children are being kept away from her, and as their mother, she believes she has the right to spend time with them. This led to her traveling from the mainland to San Pedro Town, where her kids live, on June 22nd to try to see her twins. As shown in video footage she recorded with a phone, Hartin was denied entry at the Grand Colony property, once her home. She demanded access to the property claiming she wanted to get some of her belongings. Jasmine also said she wanted to see her kids. Hartin had a confrontation with Ashcroft, and three days after, she was arraigned for assaulting Ashcroft’s employee.

This resulted in the revocation of her initial $30,000 bail, and she was sent back to the Kolbe Foundation-Belize Central Prison. She managed to secure a second bail and was a free woman four days later. The bail comes with certain conditions, and some of these include a daily 7PM curfew, daily check-ins at the San Ignacio Police Station, and good behavior.